As the afternoon votes in the French Presidential election are counted, it seems that it will be extremely likely that Presidential incumbent Nicolas Sarzoky will face off against socialist contender Francois Hollande in the second round on May 6th. 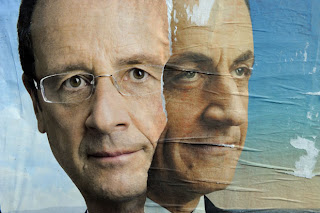 In the French constitution, unless any contender has a clear 50% of the votes in the first round, a second round is required when the two main contenders are pitted against each other for the spoils.  With those contenders rumoured to be virtually level-pegging, the significant factor could be far-right contender Marine Le Pen's monstrous 20% share of the first round vote.

It is amazing to think that less than a century after France was humbled by the war machine of Nationalist Germany during WWII, one in five French people can be found voting for a nationalist French party linked to fascists and extremists.  Having said that, at least the French contenders cover the entire political spectrum, giving voters a far better range of choices than that offered to us here in the UK.

Far-left contender Jean-Luc Melenchon has already come out in support of Mr Hollande, who favours a 75% rate of tax for high earners as one of his major planned policies should he win on May 6th.  In order to avoid becoming the first single-term president since the early 1980s, Sarzoky will now have to convince Le Pen's far-right voters that he is the man to tackle major issues such as national debt and immigration.  In doing so, he must be careful that he does not alienate his central-right supporters by adopting a racist anti-Muslim stance.

As in England with it's narrow, incestuous three-party politics, it is the small number of those in the middle of the voting spectrum which may have the decisive say.  The final reckoning in the election may be decided by the 6 - 8% of people who voted for centrist candidate Francois Bayrou.  The future of politics in Europe could decide whether those small number of potential swing voters land on the left or the right side of the fence.

France has the fifth biggest economy in the world and is one of Europe's two remaining economic powerhouses.  The outcome of this election will be felt worldwide, not just within the Gallic borders.  It's most pertinent for the United Kingdom that while we have opted for a conservative stance that sees us heading into double-dip recession, favouring lower taxes for the rich and reduced opportunities for everyone else, France may provide us with a comparitive position that would allow us to learn from our mistakes.

Whether our position improves or not, Hollande is a key step closer to ending the toxic austerity program in the heart of Europe and perhaps offering hope of an alternative to progressives everywhere.
Posted by Kris Holt at 20:32 No comments:

Government Should Learn Lessons from Trade Unions in Conflict Resolution

So how was the fuel crisis for you?  You know, the one that the government started, with its bizarre, inflammatory rhetoric, while Unite, the tanker drivers' trade union, quietly and responsibly went about their business of consulting their members on a worst-case scenario, while negotiating a deal that wasn't primarily about pay or conditions, but one about training, conditions of service and the instigation of health and safety regulations designed to keep the public safe. 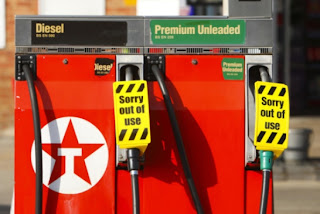 The spectacle of drivers queueing for hours on forecourts to drain every last drop of petrol from rural petrol stations is one that is bemusing at the best of times for pedestrians like myself, but at a time when there is no petrol shortage and when there can legally be no strike for at least a further week, it is a jaw-dropping sight.  When I see Government ministers like Francis Maude advising people to fill jerrycans with petrol and keep them in their houses (advice swiftly retracted once the Fire Brigade Unions pointed out that this was a fire risk and an obviously bad idea), I find myself wondering if the people in charge of our country have any practical knowledge or skills whatsoever.

Make no mistake, the government is itching for a strike so it can have a 'Thatcher Moment' and be seen to clamp down hard on unions.  However, it's rather difficult for a government of incompetence to pick a fight with an organisation that is instead focusing on doing its job.  Nick Dennis from Unite diplomatically described the government's stance as 'unhelpful' but I'm sure that he could have, had he been pressed, found a dozen other words that described the government's involvement in the self-created crisis more effectively.

Ed Miliband has been asked about his position with regard to strikes and has sensibly sought to avoid a position of outright support for Unite.  However, he has rather missed the opportunity to strike at the heart of the government's utter incompetence.  I remind you that Francis Maude is in charge of the Cabinet Office, whose purpose is to provide support and advice to Cabinet Ministers.  The notion that contingency planning for all possible outcomes should be something that happens quietly in the background at all times is lost on our leaders, who are ever ready with a soundbite but are able only to be reactive in times of crisis.

It is sad that at a time when the government's slogan is 'We're All In This Together' they cannot trust organisations to resolve industrial disputes through an agreed process without generating media hysteria.  I mention this only because when the hours of drivel spouted by ministers are long forgotten and the appallingly militant headlines spouted by our disgusting right-wing media are sent back to the recycling centres for responsible disposal, I am certain that a deal will be struck that will suit both sides and avert a crisis that only ever existed in the feverish minds of our supposed elites.
Posted by Kris Holt at 13:20 No comments: