Ah, so many things to write about...a general election campaign thrown wide open by a stylish podium performance from a liberal, the entire UK airspace frozen for days by an Icelandic volcano, the country's first case of corporate manslaughter which could see directors being imprisoned for negligence. I wonder how I ever coped without a blog. Presumably I just used to read about these things and have private thoughts.

No, it's no good. I want to talk about all those things but the sky is blue, the sun is shining and I just feel too good to wax lyrical about something so thoroughly indigestable on a Saturday morning. Instead, I'm going to talk about something very close to my heart. I refer, of course, to TV chefs.

I don't think it's an exaggeration to say that the UK is obsessed with celebrity chefs. It goes far beyond simply watching their television programmes and buying their cookbooks. These days they can be seen dating models, backing political figures and fronting national campaigns about healthy eating. The most famous and loudmouthed ones are even exported so they can be famous and loudmouthed in other countries.

I am no different from anyone else in this regard. Indeed, such is my love of cooking and food in general that I am far more interested in the regular comings and goings of TV chefs than I am in, say, Premiership footballers. I recently came up with the idea of filming myself in my kitchen, a ten minute skit of me messing around with chicken breasts and chili flakes, and posting it on FoodTube. After suggesting the idea on Facebook, I received 15 comments (some complimentary, some less so) in as many minutes.

Regular readers of this blog will know my fondness for the Hairy Bikers, but I regard them (perhaps unfairly) as enthusiastic amateurs, much like myself. I like to watch Nigella Lawson and Sophie Dahl for obvious reasons, and while I like their programmes I do not regard them as chefs in the truest sense. Who then, are the UK's finest for me?

Four names come to mind...I have a favourite, but I'm not going to say which. Rankings are for football teams and schools under Labour governments. Here then are the UK's four best TV chefs and why... 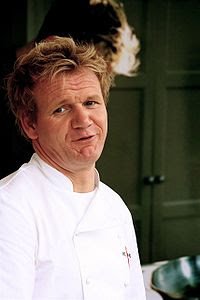 Love him or hate him, I'm a huge fan of Gordon Ramsey. He is a talented and passionate chef with an excellent grasp of fundamentals. It's this grasp of detail that makes Kitchen Nightmares such a compelling show. Gordon is the only chef who could march through a menu of goujons and jus and yell, 'WHERE'S THE FUCKING PIE?!' It's a shame, all considered, that he is more famous for being rude than for his ability as a chef - but perhaps he's happy with that...

Padstow's Rick Stein has made his name primarily as a seafood chef, and his enthusiasm for the genre is intriguing at a time when the UK seems to be very much out of love with fish. As a sushi fan, I was always going to love the multi-course sushi meal that he cooked for the Japanese Ambassador but perhaps what attracts me most to his shows is the way that they always make me think of blue skies and warm evenings, simple dishes cooked to perfection and enjoyed in good company. At his best, Rick reminds me why I like food so much.

Finding a category all of his own, Heston Blumenthal is more food scientist than chef, but anyone who can charge people to eat snail porridge and egg'n'bacon ice cream has got to have something about them. Having survived rumours that his Fat Duck restaurant poisoned as many as 400 people in 2009, Heston remains charismatic, innovative and totally bonkers. The thing I love most about him is the way that he looks for influences for his show and pushes borders at every opportunity. The Christmas idea was excellent, the Hansel & Gretel house was inspired, but for me the edible garden was the pinnacle. Genius.

Heading the list of lifestyles I would love to emulate, the entirely self-sufficient Hugh Fearnley-Whittingstall is another chef who has become synonymous with the part of the world in which he lives. He is the owner of River Cottage in a small corner of Devon and as well as growing his own fruit and veg, making his own cheese and cider, he is probably Britain's most famous smallholder, champion of the allotment and organically-grown produce. He even single-handedly stormed a Tesco AGM and tried to get shareholders to change the company's chicken farming processes. If I had a few million behind me, I would be Hugh.

Who's your favourite?
Posted by Kris Holt at 10:41