As a boy grows into a man, there comes a time when he may look back upon the things he encountered in his childhood and reflect with sadness that maybe they weren't actually as great as he remembered. Morph, Johnny Ball, Knightmare...all staples of my childhood that when I look back on them now, turn out to be more than just a little bit naff.

But some things remain, because some heroes have to endure, rather than fading away and dying. And nothing is so indelibly burned onto my memory than my first true hero, who I discovered when I sat next to my father on our dilapidated sofa, and watched Clint Eastwood in the spaghetti western Dollar Trilogy. 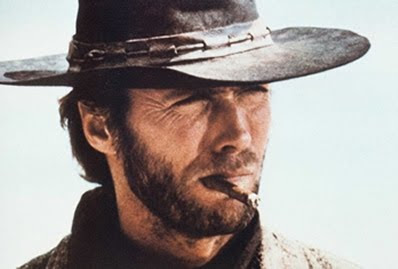 What epic films these are. Can there be any villain more twisted than the evil Indio, his maniacal laughter ringing in our furious ears as he rapes Mortimer's sister and shoots her husband? Can there be anyone more shrewd than Eastwood's Man With No Name, playing the Rojos and the Baxters against one another in the cemetery before finally killing Ramon Rojo in the final shootout on Main Street? My childhood memories are full of Ennio Morricone's haunting musical scores, which drum up to an epic climax when a growling Eastwood demands that his opponent shoot for the heart.

Heroes stay with you, no matter how old you become. The music still plays, the shots ring out exactly on cue. The Man With No Name walks out onto Main Street and tells the undertaker to reserve three coffins, before single-handedly taking down a gang sent to kill him. He might just have been the first great action hero.

So what happened? I mean really, what happened? I've been trying to avoid as much coverage as possible of the Republican National Convention in the US, which seems to me to be a vicious collective of deceitful, religiously-motivated racist bigots. But self-defeating arguments about running the free world aside, why is an American national treasure like Clint Eastwood rolled out at the Republican National Convention to bumble his way through an incoherent speech that ends with him simulating a conversation with Barack Obama by talking to an empty chair?

The Twitterati and the liberal media have gone to town, with much being made of how the aging actor upstaged presidential candidate Mitt Romney with his bizarre behaviour. There are parodies, photo mashups and 'LOL's aplenty. But as much as I want Obama to win the election, I can't enjoy this moment.

You, moustachioed teenage photoshoppers...do you even know who you're mocking? How many bounties did he collect? How many evil men did he kill? You couldn't throw aside a poncho with one tenth of this man's casual disdain. And most of all, you couldn't deliver the line 'My mule don't like you laughing' without reducing an entire cinema audience to comedy tears.

Let's do a deal, Clint. Stop talking about politics now, while you're still slightly ahead of the game. You might be an old man, you might be as mad as a march hare. But when it comes to a Mexican standoff, no man alive is your equal.