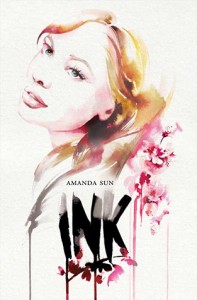 Note: This review was first posted on Faye's blog, 'A Daydreamer's Thoughts', which comes highly recommended to all readers of fiction.  Thanks Faye! :)

Summary:
On the heels of a family tragedy, the last thing Katie Greene wants to do is move halfway across the world. Stuck with her aunt in Shizuoka, Japan, Katie feels lost. Alone. She doesn’t know the language, she can barely hold a pair of chopsticks, and she can’t seem to get the hang of taking her  shoes off whenever she enters a building.

Then there’s gorgeous but aloof Tomohiro, star of the school’s kendo team. How did he really get the scar on his arm? Katie isn’t prepared for the answer. But when she sees the things he draws start moving, there’s no denying the truth: Tomo has a connection to the ancient gods of Japan, and being near Katie is causing his abilities to spiral out of control. If the wrong people notice, they’ll both be targets.

Katie never wanted to move to Japan — now she may not make it out of the country alive.

A girl, ordinary but special. A boy, misunderstood. Two dead mothers. Special powers. Fighting. Tears. A bag full of ‘My heart soared and I knew I couldn’t live without him’ cliches. Welcome to Young Adult Paranormal Romance fiction review.

In a genre where vampires, werewolves, zombies and faeries have received critical attention from every possible angle over the last few years, publishers are desperate to find something new and interesting, so Harlequin Teen must have been very pleased to find first-time author Amanda Sun’s novel about kami, spirits from the Shinto belief system, which in this particular incarnation take the form of individuals whose drawings come to life.

To walk us through this genuinely intriguing premise, we are introduced to spunky-but-vulnerable blonde-haired orphan gaijin teenager Katie Greene, who is living in Japan with a nondescript aunt due to an improbable set of circumstances with her extended family and US Social Services following the death of her mother. When she meets Yuu Tomohiro, a slouching, distant anti-hero who nonetheless guards an improbable heart of gold, she unwittingly stirs his kami blood to the point where dark and dangerous things start to happen.

So far, so good. Katie is a likeable if slightly bland main character, but Sun’s initial steps seem uncertain ones, with a notable over-reliance on colour as a visual medium in many scenes, including the one where we first meet Yuu. In the space of a few short paragraphs, we see his then-girlfriend’s black book, pink-and-silver nails, his own navy blazer and copper hair, and so on. The girlfriend is swiftly removed from the picture, and a pregnant might-be-girlfriend is introduced and immediately discounted within a few pages. This leaves the way open for Katie and Yuu, though their initial fleeting hints of romance are somewhat untidy, veering from the Bridget Jones-esque moment where she climbs a tree to prove to him that she can make an exit (simultaneously displaying her underwear to all and sundry) and a scene immediately afterwards where he tries to walk into her to intimidate her into leaving him alone.

Yuu is a vast disappointment as a love interest. He is an example of the stock teenage ‘bad boy’ mould, constructed directly from lazy cliches. In two consecutive scenes, we see him beating up boys much younger than him, and then when he thinks nobody is watching, he helps an old lady onto a train. Despite numerous references to how troublesome and dangerous he is, Katie is intrigued by his non-existent sense of mystery (where does he go when she’s not around?) and stalks him around the neighbourhood until she discovers that he breaks into a fenced-off archaeological site in order to be able to draw his magical sketches without attracting undue attention. Given that both his personality and his magical powers are still almost completely unexplored at this point, the idea of a dangerous guy who finds redemption through drawing sadly reminded me of the villain Raymond Calitri from the most recent film version of ‘Gone in 60 Seconds’ (2000). Calitri is an unintentionally comic figure, a supposedly vicious killer who nonetheless finds time to talk at length about his interest in carpentry. It is not a welcome comparison.

Characterisation is easily the weakest part of Sun’s debut. Without much effort on her part, Katie soon garners an alternative potential love interest called Jun, but he is suitably interchangeable with Yuu, given that the two have the same magical powers, the same interests and the same dependable white-knight qualities that seem so out of place in seventeen-year old males. Fortunately, Sun makes sure to avoid confusion between the two by giving them different coloured hair. The background characters are treated in a similarly off-hand fashion and seem about as substantial as the paper creatures that the kami create in the novel.

Since reading ‘Ink’, I have seen several online comparisons between it and the ‘Twilight’ series, a comparison which is to a degree inevitable given the subject matter and the lack of freedom that an author has to really explore their themes if they want to attract the attention of a major publisher these days. I cannot comment on the comparison as I have never read any of Stephanie Meyer’s work, but in common with the first ‘Twilight’ movie, the first half of ‘Ink’ moves at the speed of continental drift. However, unlike the first ‘Twilight’ movie, the midpoint in ‘Ink’ sees a dramatic improvement when the kami premise is explored and the characters actually start to do things.

Notably, there is a scene where in a bizarre attempt to force her away, Yuu takes Katie to a love hotel, treats her aggressively and kisses her forcefully. Without wishing to make light of the seriousness of the situation that Katie finds herself in, I have seen this referred to repeatedly online as a rape scene, and I can assure any potential reader that ‘A Clockwork Orange’, this is not. The truth is that the scene, like much of the novel, is so emotionally unengaging that I found myself wondering why it appears at all.

It is a tremendous shame that this sense of inconsequentiality pervades the novel to such an extent, given that Sun’s writing style is generally very good. Her dialogue is believable and enjoyable, and she does an excellent job of capturing Shizuoka through Katie’s eyes. Her use of pathetic fallacy is one example of technique applied subtly and unobtrusively. The settings, such as ‘the stomped-down grass and broken branches’ of Toro Iseki, or the ‘barnacle-encrusted base of the snaking orange hallways’ of the Itsukushima shrine, are distinctive and effective.

If my disappointment at ‘Ink’ is palpable to you, you should be aware that as a 35-year-old man, I am not the likely target market for this book. Nonetheless, I was quietly optimistic that ‘Ink’ had the potential to be genre-defining in the way that ‘The Hunger Games’ or ‘Divergent’ were. While it would do the book a disservice to describe it as an opportunity lost, it would be true to describe it as an opportunity that is not fully realised, for while the action scenes in the second half are well-observed, the characters left me feeling largely ambivalent and the romance seems thoroughly contrived. While I would certainly read more fiction by Amanda Sun, I would expect that the subsequent volumes in this particular series will pass me by.

Before I finish, I would like to make a special mention of the ‘Ink’ cover art, which on my pre-release copy is absolutely beautiful and one of the reasons I was attracted to reviewing it. Suffice to say, if Katie had been formed as well by her actions in the novel as she is captured in brush stroke on its cover, ‘Ink’ could have been something very special indeed. Sadly, it seems like it was not meant to be.
Posted by Kris Holt at 08:51