A Notepad and a Dream - Danielle Shipley

In my new series, 'A Notepad and a Dream', I'll be interviewing up-and-coming authors about their books, their writing process and their future plans. If you have a book shortly due for release and would like to take part, or know someone else who would, please let me know via the 'Contact Me' page above.

In the third installment of 'A Notepad and a Dream', prolific penmaster Danielle Shipley holds her breath and casts a spell...

Can you tell us a little bit about yourself and your novella?

I’m the 26-year-old wrangler of my headful of imaginary friends. I’ve been doing the writing thing pretty much my whole life, though it wasn’t until my latter teens that I started thinking about going pro. The latest addition to my rapidly expanding list of publications (because, you know, why stop to breathe, ever?) is the tangled web of magical drama affectionately dubbed ‘The Surrogate Sea’, which officially launched this past Tuesday, bringing the number of Wilderhark Tales to six. I aim to wrap up the series with Books 6.5 and 7 by the end of this year. (Seriously. I’ll breathe when I’m dead.)

'The Surrogate Sea' is the sixth book in The Wilderhark Tales, your series of novellas that are loosely based on popular fairy tales. What particular challenges present themselves with creating such a long-running series?

The characters’ to-do lists throughout the series basically read: 1, encounter a magical problem (sure, blame the witches, though you probably brought it on yourself). 2, go off on an adventure (bonus points if at least one leg of the journey goes through Wilderhark Forest!). And 3, find true love (because your author likes to play matchmaker). My own to-do list, then, has been: 1, find interesting ways to mix it up within the formula so that each Wilderhark Tale is both familiar and full of new things to love – i.e., the burden of fairy tale retellers everywhere. 2, find which famous fairy tales lend themselves to scenarios I can realistically see my specific cast of characters getting into – since once my world starts establishing its own parameters, I can’t just throw them out the window for the sake of ‘but this would be so cool!’. And 3, strive to make each new book live up to the ones that came before it – which, to hear my readers tell it, I’ve not been failing miserably.

With television shows like 'Once Upon a Time' being very popular just now, the market for stories based on fairy tales is clearly very healthy. Did you consciously set out to meet a trend with your writing, or have you simply focused on telling stories that you enjoy?

Considering how totally behind the times I am, I call it a miracle that my lifelong fairy tale fascination and the current story climate happen to be in such great alignment. The first Wilderhark Tale, ‘The Swan Prince’, came about pretty much out of nowhere, with no real plans to ever publish it, never mind spin out a whole series. But the characters and I simply couldn’t leave each other alone. And when I decided I wanted to self-publish the Robin Hood trilogy I adore with my whole heart (‘The Outlaws of Avalon’, coming within the next couple years; stay tuned!), I figured I’d get in some practice by first putting out the multi-volume prequel that The Wilderhark Tales essentially is.

What book do you wish you could have written?

If I could claim the Raven Cycle series by Maggie Stiefvater, I in a heartbeat would. I love those books’ way with words and wall-to-wall bromances. And, okay, their popularity, too. So sue me for wanting to be hailed by legions of fans as a wordsmithing master. Aim high, say I.

Is there one subject you would never write about as an author?

There are several subjects I wouldn’t want to touch right now, but I’ve learned better than to trot out a hard ‘never’. A decade-and-a-half ago, I’d have told you I’d never write stories where the characters die. Skip ahead to the fall of 2013, where two of the three main characters in my National Novel Writing Month project were dead by Chapter One, and background characters by the hundreds went on to drop like flies. The stories my muses give me to tell are ever changing. The vast difference in nature between the beginning and end of the Wilderhark Tales will attest to that!

Finally, a challenge...in twenty words or less, describe the best thing about being an accomplished wordsmith...

The power to find the words my fictional dependents need said is a privilege and joy like few others. 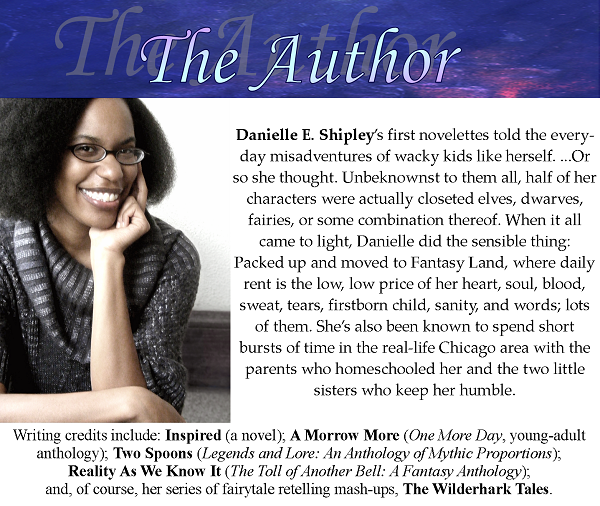