A Notepad and a Dream - Nadja Losbohm 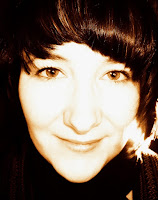 In the latest 'A Notepad and a Dream' episode, Nadja Losbohm talks translation, and stories that find themselves.

Can you tell us a little bit about yourself and your novella series?

My name is Nadja, I’m 32 and live in Berlin, Germany.  Actually, I’m a dental nurse, but at times I transform into an author, writing fantasy stories for people all around the world.  I started writing at the age of 19.  My first German novel, called 'Alaspis', was published in 2012.  Since then I have been working on the self-published project, 'The Huntress'.  Parts 1-5 are available in German, but there’s also an English edition of Part 1 called, 'The Beginnings'.  This series of books is about a young woman who isn’t the right kind of person to be a supernatural heroine, but she and the reader find out that there’s more to her than being a faceless girl in the crowd.  I had a lot of fun writing the books and I think you notice that.

The protagonist in the 'The Huntress' series is Ada, a young woman who is selected to protect the world from supernatural devastation. To what extent does your own personality come across in your main character?

I think it’s difficult not to add certain things to your characters.  It’s something that makes the people in your book vivid.  So, Ada and I do share a few things, like some of the experiences she goes through, our sense of humour, our will to not give up. Ada also doesn’t like Brussels sprouts, just like me, though I don't eat green vegetables at all.  But that’s another thing.


'The Huntress' contains elements of Urban Fantasy, Romance, Young Adult and Humour. Are there any particular challenges with trying to fit so much into one series?

The writing process was quite easy.  It wasn’t me who found the story.  The story found me.  It wanted to be written, it seems.  'The Huntress' told me what she wanted to include and what not to. The only thing that challenged me was to write fighting scenes. That was a bit tough.

Which other self-published authors do you most admire, and why?

There are a few I admire for different reasons.  I’m very impressed by author Jason Tru Blood, who writes so many different stories: fantasy, romance, historical fiction, crime and lots more.  I cannot imagine writing in so many different genres myself.  I also admire authors Leisl Kaberry and Kasper Beaumont.  The worlds they've created in their books are just amazing, plus they’re very kind people.  I wish I could read more self-published authors.  There are incredible talents out there without a big publishing company behind them.

As someone who speaks (excellent!) English as a second language, how easy did you find the process of arranging for your work to be translated?

Getting 'The Huntress' translated was a nightmare.  I worked with a translator who quit after a few months for health reasons.  Then someone else translated the book, but I was told it wasn’t the way it should be.  So, the translating process had to be done again. It took more than eighteen months to finish the English version, a real emotional roller coaster ride.  But I just couldn’t give up.  That was not an option for me.  There she is: the huntress in me.

As a successful self-published author, what advice would you give to those seeking to follow in your footsteps?

Don’t give up! Do what you can, follow your heart, be grateful for every chance you’re given.

You can find all her books on Amazon, and she's hopeful that there will be more opportunities for readers to check out 'The Huntress' in future.
Posted by Kris Holt at 23:18