My Travels Through Imaginary Lands, Pt. 9

The hiss of the rainfall was quickly followed by the rumble of thunder, and as the skies turned in seconds from yellow to black, by the anxious cries of men.  The forewoman had not stopped looking at me and now as an immense crowd of drenched labourers began to fill the space behind me, she beckoned me through the door where she stood and closed it after me.

So sudden had been the flow of events that I hadn't really taken the time to think through what I was doing, or what motive my new companion might have for inviting me in.  When I stood awkwardly there, she gave me a sharp look, like she was waiting for something.  All I had in my repertoire at that moment was the wherewithal to place my bag down at my feet, so I did that and then waited for further instruction. 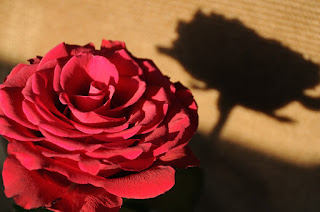 The room was sparse and functional as you might expect, but it had the odd touch that hinted at the predilections of its occupier.  The bed in the corner was wide and the sheets were of far higher quality than anything else here.  The bed was made but a single corner was folded back, as if to invite the weary labourer to rest.  A small upright mirror, the kind a man might use for shaving, stood on a nightstand immediately next to the bed. Close to me, a sand-coloured set of drawers was topped by a single red rose in a quartz vase.


The forewoman was gazing into the mirror.  I watched her press a calloused fingertip to the loose skin below her eye and then reach towards her hair.  A peppering of unselfconscious grey lurked there among the darker strands.  For a moment she was still as she pulled at the bandanna, and with an artist's eye, I committed that moment above others to memory.  It seemed important somehow, though for what reason I could not hope to articulate.  Not a second later, her hair was loose and fell away.  It didn't tumble exactly, but there was a joyous flourish to the movement; a storyteller's embellishment it might seem and somewhat trite to boot, but it was as if in that second she sprang off a canvas and came to life.

For the first time, her eyes met mine in the mirror.

'We don't get many tourists this far out,' she said.  'I felt I had to save you.  If I'd left you in there, you'd have some damp, sweaty farmer sitting in your lap right now.  You're not in a place for the faint-hearted.'

I smiled, despite myself.  The air in here was cooler, and I was quickly beginning to feel better.  At some point I would have to take stock of the shame I would feel for my earlier grumpiness, but that was something for the future.

'The train journey here was pretty much like that.  It was okay, once you got used to it.'

'The train already took me where I wanted to go,' I said.

She tugged underneath her blouse, shifted the strap of a linen undergarment that seemed rather distressed by her dimensions.  'Well, if you came looking for profundity, we have that in spades.  That, and sorgha.  Lots and lots of sorgha.'

'I shall have to take some with me as a memory of my journey.'

She turned towards me, shook the bottom of her skirt and grains disentangled themselves from the wool, pooling around her bare feet.  'When the rain stops, go and take a walk outside.  I guarantee you you'll still be finding it in your pockets weeks from now.'

The idea of returning to the Ministry with my expanded mind full of dangerous ideas and my pockets full of sorgha amused me greatly and I hid my expression behind the pretense of scratching my nose.  She continued to loosen and rearrange her clothing, and when she finally reached a level of comfort that she was happy with, she let out a short sigh.  I stood politely, feeling myself slip into a conversational rhythm.

'I'm Petra,' she said, lighting an oil lamp and placing it on the nightstand.  'I take it I can trust you to be a gentleman while I change?' 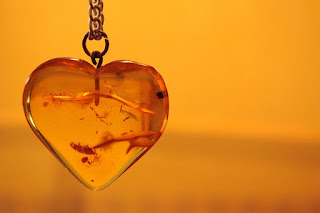 'Patrick.  And of course.'  I turned to face the wall, though I'll admit to studying the intriguing, blurred shadow that leaned over my shoulders.  In a few seconds, she indicated that I could turn round.  She was now wearing a maroon blouse that left very little to the imagination.  A small heart-shaped stone hung from a chain between her breasts.


'I'm a diplomat,' I replied.  She tensed a little at this.  One of the things you learned early when the Corps posted you to Rhigo was that the local language did not distinguish between diplomats and spies.  'Please don't be alarmed.  I'm just a man on holiday, nothing more.'

'Just as well,' she said, carefully clipping tiny jewelled earrings onto her lobes.  'There's not much to see here that you haven't already seen.'

'I had this idea that I could walk west from here until I got to Camir, but it's pretty clear that if I try, the local weather is going to broil me and then drown me.'

She laughed.  'That, like everything else you've seen, is something you'll have to get used to.'

'Have you worked here long?'

It was a ridiculous question, given her tanned skin and absolute dominion.  Nevertheless, she bore it with good grace.  'Only my entire life.  Fifty years and more in the Sholl.  It's all I've ever known.'

'You've never wanted to travel yourself?'

'There was a time when I thought about it.  One of the men that worked here with me wanted me to give up my role and travel round the world with him.  I told him that he'd have to marry me before I did that.  He said to me, "I don't think I'd be a good husband.  I'm a great lover, a good friend, but I don't think I'll make a good husband."  And I laughed, because it was impossible not to, and I replied, "My sweet, you are a very good friend, but you are not such a great lover."  He agreed to marry me the next day.'

'And yet, you still didn't go travelling?'

She rubbed a pink powder onto her lips with a forefinger.  'He was every bit as bad a husband as he said he would be.  I should have listened to him, but if I listened to everything men said...'  She tailed off.

'As if the beard didn't give it away.  No, I haven't travelled.  And in recognition of my hard work, I now own this little plot of land in the centre of the world.  Everything for a hundred miles around is my garden.'

There was a knock at the door and she flashed me an ugly, devilish grin.  'Best of all, forewomen privileges mean that I get my pick of the younger men, whenever and however I want.'  It immediately became clear why she had been preparing herself.

'Get the door, please.'  I did so, to be greeted by a stocky young man in his late teens with a bashful expression on his face.  He seemed surprised to see me, but averted his eyes respectfully.  Petra said, 'Come in, Ioan.'

The young man followed orders.  She took him by the hand and led him over towards the bed.  I hadn't been sure how Ioan might feel about being hand-picked for this purpose, but he seemed to be quite excited - even honoured - by the prospect.  Certainly he had no qualms about peeling off his clothes in double quick time and sliding beneath the sheets.

Petra looked over her shoulder at me.  'I know what you're thinking.  But I make it very much worth their while.  Stay if you like.  Watch - or join in.  I haven't been with an Ondian before.'

Some part of me was revolted by the thought, but another quite separate part of me was massively intrigued.  I retrieved my bag, offered my goodbyes and made my way outside before that part of me could gain some purchase.  When I stepped through the door, I found myself face-to-face with a group of young Rhigan farmers.  At first they seemed astonished, and then as one they grinned and each one patted me as I passed through the group.

As I made my escape back in the direction of the railway station, one called in Ondian, 'Best trip ever, right?'

CHAPTER TEN WILL BE COMPLETED SHORTLY.
Posted by Kris Holt at 23:20