This Burning Man is complete!

Those of you who've been reading my ongoing sci-fi serial, 'This Burning Man', may already be aware that last weekend, this reached its epic conclusion. For those of you who haven't yet had a chance to read TBM, I would recommend clicking here, which will take you to the start of this fun, madcap romp through future Arizona.

As it stands, my expectation was that I would leave 'This Burning Man' up on the internet for a period of several weeks to give me time to edit it and take out a few of the more annoying kinks and the glaring instance where I accidentally shoot myself with Chekhov's Gun.  For now, I'm not sure whether I will leave the story up for good or not - as ever, with any finished work, it would be nice to make something available for sale, and the thoroughly talented and delightful Elizabeth Jeannel was kind of enough to produce me a cover for the e-book version, so I expect that this is the way I will end up going.  At this stage, it seems unlikely that a paper version of 'This Burning Man' will ever see the light of day.

All of those kind people who have been involved with the project online, contributing thoughts, ideas and encouragement, will be offered a Kindle copy of the edited book. Likewise, it would be good to offer the same to the lovely folks from the Norwich Sci-fi Readers Group, who are always kind enough to indulge me as I talk incessantly about my work.

In terms of new projects in the pipeline, I recommend my other online project, the Caribou Chronicles, an urban fantasy tale which is co-written with the accomplished Canadian horror writer, Caitlin Marceau.  I would like to be involved in more short story anthologies in the next year or two, so expect this to be a focus.

Finally, in response to questions, I do have a plan for a second novel in the TBM world, as yet not fully planned, but with at least some of the characters you've met from the first.  Provisionally entitled, 'The Fox and the Mox', expect news on development in 2018! 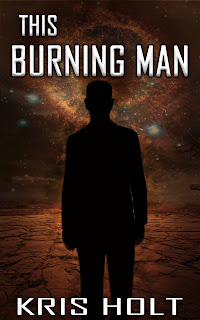 Until then, hold onto your hats, there's plenty more to come!  Best believe it...
Posted by Kris Holt at 14:40