Should the UK cease production of arms and their sale to foreign powers? 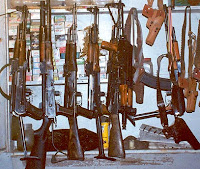 I'm going to polarise opinion today. I apologise in advance but I have to do it once in a while or otherwise the doctors won't give me my pills.

I was watching the Ten o'Clock Show on Thursday night (sad that a comedy show should be the best way to educate people about politics, but never mind) and there was a very interesting debate about Britain's role in supplying arms to foreign countries.

Britain has a long and proud history of supplying munitions to despots, and you may already know that in the last week alone, British tear gas was used on peaceful protestors in Bahrain, and British missiles supplied to Colonel Gadaffi are at this very moment killing innocents in Libya. UK readers, I hope you're forming an opinion on how you feel about this. It's being done in your name, and chances are you're barely feeling the benefit of the corporation tax.

Dominic Raab MP made the point that 55,000 UK jobs rely on the arms industry. War on Want's Yasmin Kahn made the counter-point that while these jobs may be important to the UK's commerical interests, this is not enough to justify the inevitable suffering and death that results from the sales.

This represents a massive dilemma for a union representative. I do not represent workers within the arms industry but unions are supposed to promote employment and I would not want to be the one telling these communities that they can expect their jobs to vanish and their standards of living to plummet. That said, 55,000 jobs is a relative drop in the ocean and there could be alternative job options made available to the redundant workers. This is, after all, what our current government is saying to the 500,000 public sector workers who will be jobless by the end of 2014 if events continue down their current destructive path.

On a personal level I am absolutely opposed to arms sales. As Yasmin Khan said on Thursday, we may be able to make even more money by dealing in crack cocaine, but that doesn't make it the morally correct thing to do (notice that a legal comparison is not the issue here.)

Of course democracies need to defend themselves but once we have handed over those tanks and sophisticated military aircraft, we have no way to determine whether they will be used for defensive or offensive purposes. I further believe that we shouldn't try to cloud the debate by saying that just because we sell guns doesn't mean we are the ones pulling the trigger. As far as I can see, that is an irrelevant debate. If we don't sell the gun, it will be sold by someone else and we will lose a competitive advantage while the recipient of the bullet will still be just as dead. However, at least then we can be sure that the blood is not on our hands and this would allow us to go some way towards setting a moral example to the rest of the world in the manner that we previously did with landmines.

Of course, the economic system in the UK means that each individual has the personal power to resolve their ethical dilemmas via the free-market system. You do not have to buy meat if you are a vegetarian, or petrol if you are an environmentalist. However, you cannot divorce yourself from the ethical implications of this debate, because the benefits that we receive from the industry are partly intangible (thinking back to those workers, their communities and their social cohesion rather than just the monetary consideration).

So the question I ask you is this: Do we, as Britons, want to be a producer of weaponry sold to other countries? In comparison, how do my US readers feel about their country selling weapons to others?
Posted by Kris Holt at 12:07