The Cheese of the Day is...

In one of those rare-but-essential occasions when Four Thousand Words gets distracted by the utterly frivolous, I have responded to popular demand and today's blog entry will be about cheese.

Cheese! Milk-based wonder sent down from heaven to enrich the lives of future heart attack victims everywhere. The reason that Jacob's crackers were invented. Nutritional and cultural staple throughout large sections of the developed world, as varied in its appearance, smell, taste and texture as any generic food type known to man. 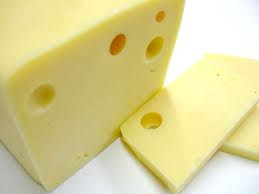 In these circumstances, it seems appropriate to choose a Cheese of the Day - but which one?

When choosing a cheese, I feel that you have to start with a country of origin. England has a growing reputation as a cheese producer, with 700 reputed local cheeses in production. The USA leads the world in production volume, making over 4 million metric tons each year. Switzerland, Germany and Finland import and consume over 20kgs of cheese per capita in the same time. Greece have a claim as potential inventors of cheesemaking, as the process is first mentioned in detail in Homer's Odyssey. More romantic souls refer to subtle hints about cheesemaking equipment depicted in tomb murals from Egypt two thousand years prior to that, and it is feasible that informal production may have first begun thousands of years earlier again when sheep were first domesticated by humankind!

Phew. But despite the dizzying scale of the task, I have to make a choice and given their reputation as the world's largest cheese exporter, producer of the some of the finest and most pungent cheeses in the world, not to mention those wonderful, full-bodied red wines that complement the cheeses so well, it seems appropriate to me that the Cheese of the Day would come from that fine land of gastronomic adventurousness, France.

This gives us a wealth of options from which to choose. My own personal favourite, Reblochon, is a nutty French cheese that was popular in Italy up to the 1960s and is an essential ingredient in tartiflette. However, it is not widely known in England.

Another friend recommended Livarot, a hearty-odoured cheese from Normandy that forms an important part of the local festival. I have the quality on good and trusted authority, but due to the lack of availability locally, I can't put it forward without having tried it myself.

In the context of a bunch of grapes or a bacon sandwich, cheese connoisseurs will tell you that only Brie will do. Produced in the Champagne region from whole or semi-skimmed milk, Brie is surrounded by a rind of edible white mould and new varieties of Brie recently produced have seen the inclusion of herbs, fruit and nuts to vary the flavour and texture. France have leaped to the defence of one of their finest exports, designating that only two types of cheese produced (Brie de Meaux and Brie de Melun) may be sold under that name. 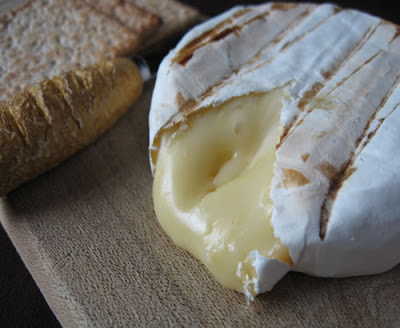 But despite strong competition, the Cheese of the Day is...Camembert!

Camembert is a soft cheese very similar to Brie and indeed, was reputedly first made in Normandy in the eighteenth century from instructions given to locals by visitors from that region. However it is usually produced and sold in much smaller wheels, meaning that the rind makes up much more of the taste. Camembert gets its distinctive flavour from many naturally-occurring chemical substances, including ammonia, succinic acid and salt. It achieved prominence in the French conscience after being given to their troops as part of their rations during World War I.

Right, enough about food - next time, we're back onto politics or international events. Cheese may be the ultimate convenience food, but in absence of the product itself, I just camembert talking about it any longer.
Posted by Kris Holt at 09:03