The US and Guns

I presume that if you're reading this, I won't need to tell you what prompted a post about gun control in the US. I presume that to have found your way here, you are already aware of the shooting of twenty elementary (primary) school children and six adults at Sandy Hook Elementary School in Connecticut. It is a deplorable act, but as we speak, investigations are still ongoing into the mindset of the individual deemed responsible. We have seen unhelpful talk about his mental health, seen him labelled a 'goth' and a 'loner', as though these tags are somehow cast iron indicators of derangement, bubbling under the surface, ready to erupt at any time.

At Sandy Hook, the media circus will quietly disengage when the answers to the questions on a million lips tell us nothing about how to avoid the same things happening again. As Sandy Hook on an innocuous December morning, so Virgina Tech or Columbine. Once the revulsion of the immediate aftermath of Sandy Hook wears off, there is a quiet resignation to what will happen next - the NRA-lovin' Good Ol' Boys flex their muscles and make statements about how if more people owned guns, more deranged individuals would get shot before they did serious damage. The political establishment wrings their hands, cries their tears, and declares that now is not the time to talk about gun control. We, safe behind a statistic that shows only 0.25 gun-related deaths per 100,000 people per year in the UK, can shake our heads and wonder why the States just don't get it. 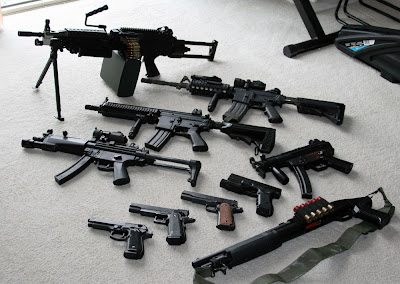 So, to look at the underlying statistics, exactly how many gun-related deaths in the US are there each year? Wikipedia cites statistics from the World Health Organisation and gunpolicy.org, showing that the US, with 9 gun-related deaths per year per 100,000 people, you are 36 times more likely to die as a result of a gun-related incident in the US than you are in the UK. However, of those deaths, nearly two-thirds are suicides.

If debate about senseless loss of life features in US political discourse, the figures suggest that it should be overwhelmingly focused on cheeseburgers and healthcare rather than gun control.

The statistics shown here are not an attempt to make light of any aspect of the killings in Connecticut, nor to play down the impact that such events have upon American society. However, they are a genuine attempt to try and extract some facts from huge walls of data and the emotive, political rhetoric that follows. Nonetheless, the arguments against assault weapons and weapons with large-capacity magazines would seem to be compelling. Your chances of dying in a car accident may be higher than your chances of being shot, but while a car is a functional method of transport, an assault rifle can really only be used for one thing.

There are signs too that the US is starting to ask the right questions. I followed the news surrounding Columbine and Virginia Tech, and at that time, there was much talk about youth disenfranchisement and almost nothing about mental health care. The fact that there now seems a willingness for such things to be discussed suggests that US society is now willing to accept that headway may be made by offering greater support to those individuals who might commit these crimes. The Republicans might do well to reflect that a legacy of Obamacare might be that they get to keep relaxed gun laws in the long term.

So if you'll forgive the unfortunate nature of the analogy, if the ongoing debate about mass killings is a lost battle for those opposed to gun control, are there signs that they are winning the war? The fact remains that however grim the media make gun crime in the US seem, the stats still show that the chances of the average American dying in a gun-related incident are miniscule - and that even then, the chances of said incident being a suicide are double the chances of it being a homicide. This may be small comfort for those families that are currently burying their children, but evidence suggests that such incidents don't severely impact upon public opinion about gun control.

Indeed, when you consider that there are supposedly nine guns in America for every ten people (that's 315 million guns, if you're counting), why is the murder rate not higher? Psychotic individuals will have the capacity to inflict greater casualties if they have access to guns, but statistics still suggest that the overwhelming number of American gun owners are responsible gun owners.

Violent crime is a reality for all societies, but whether we in the UK agree with it or not, the US still shows every sign of choosing their individual liberties over stricter gun controls. Despite this, perhaps the real unsavoury truth about America is that actually, despite appearances, statistics would suggest that it remains a very safe place to live. Unless you like cheeseburgers.