It's probably appropriate that after returning to Four Thousand Words from my successful Nanowrimo hiatus that my first blog entry for absolutely aaaaaaages is selling someone else's dream rather than my own.

My friend Sammie (also known as Faye), who I met through Nanowrimo, is attempting to win a competition run by teen fiction publishers MiraInk to win an awesome job - blogging for a wage. 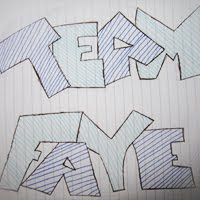 Contrary to popular belief, those of us that bare our souls on the internet so that the rest of you have something to read that is slightly more informative than the Daily Mail or the Sun are, shockingly, not financially rewarded for our efforts. I know, I know. When I began this enterprise as a way of venting my spleen that wouldn't see me banned from public places or having an aneurysm at the sheer bloody awful state of things, I expected to have a following of millions of smiling, attractive followers within the week, and enough advertising revenue and merchandising to retire forever to Miami within a few months. After all, I have a IQ in three figures and a vicious sense of humour, which puts me on a rough social par with Frankie Boyle. But unfortunately, I'm also about as wealthy as a typical Glaswegian. Anyway, I digress.

Sammie is one of ten hip young things who have a chance to win the blogging contract, and it would really help her efforts if we could share her sixty-second entry far and wide to ensure that she nets this prestigious prize.

The question that Sammie asks in her entry is, 'Why Blog?' Unlike me, she has a slightly more in depth answer than 'if I don't get the crazy out, I'm scared I might pop a vein.' Sammie reviews books - those much vilified and sadly underrated cornerstones of civilisation that are disregarded by so many in an age of instant gratification and reality television.

In addition to a role contributing something positive to society, Sammie is sweet and friendly, and has lots of time for her audience. Her blog, 'A Daydreamer's Thoughts', can be found by clicking on the link.

Sammie is right that it takes guts to put a piece of yourself on the internet - that unforgiving, all-encompassing web that has access to all your drunken pictures and never forgets all the silly things that you have to say. But when you have the reward of knowing that something you have produced is enjoyed and shared with others, it makes the whole act of producing something so completely worthwhile. In short, it is what being a writer is all about.