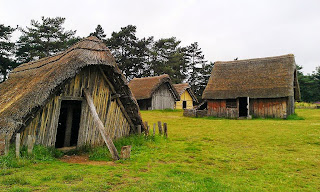 I've been a bit lacking in inspiration lately, but I recently dredged up and edited the start to an old Nano project from a year or two ago and thought I would share it with you. I'm fascinated by the time of the Heptarchy - the seven Anglo-Saxon kingdoms that eventually joined together to form England - and I've always wanted to write historical fiction, though it would most likely end up being historical fiction with a few supernatural elements, because it's more fun that way! If people are interested, there's a lot more of it written, so I could always post more of it for your enjoyment.

Twin plumes of smoke rose over the ridge in the sodden countryside, and the smell of burning thatch filled the air. Two pairs of horses' hooves thudded to the top of the ridge and surveyed the burning village in the distance.


'This should be sport,' his younger companion replied.


The older man gripped the reins tightly and patted his horse's flank. 'We should hold for Simon and the others.'


The younger man raised a quizzical eyebrow and snorted, sounding not unlike his horse as he did so. 'If we're lucky, the fires will still be burning when they arrive.'


'Your urge to fight without numbers at your side disturbs me, Leoric. The place for a bandit is at the end of a noose. Fight them in the open and even the lowliest man may score a lucky strike.' Æthelstan reached up to his head, righting a thin crown of twisted reeds that was knotted through his thick dark hair. 'If you cannot pick your battles, the crows will come for you soonest.'


'The crows come for everyone in time, father. I find it hardest to know numbers when I'm not close enough to count my enemies.'


'Watch your tongue, boy,' Æthelstan replied. 'I was young once, and I know that rush of blood. But for now, stay your strike if you would win your fight.'


'As you say,' Leoric shrugged. His son's indifference infuriated Æthelstan. So arbitrary were Leoric's ways that he could just as easily slay a fallen enemy or cuff him around the ears and walk away laughing. It wasn't just that that frustrated him, though. Æthelstan was sweating from a hard ride, but Leoric looked as though he was taking his horse out for a morning trot.


'Your ways are unbecoming of a prince,' Æthelstan warned.


'But becoming of a king-to-be.' Leoric turned his horse and looked his father directly in the eye. The boy pulled his sword from his scabbard with a whisper, and assumed a fighting stance. Despite himself, the king smiled. Now, his son looked every inch a man. His limbs were long, and his balance was more sure than any other man in Æthelstan's personal guard. 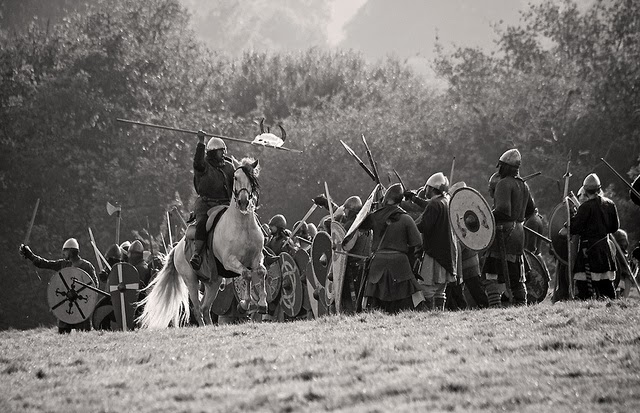 'Remember, you're still not too old for me to give you a thrashing,' Æthelstan said.

'A foolish thing to say to a man with a sword,' Leoric grinned.


'Aye,' Æthelstan agreed. 'But you are not a man yet, much less a king. Your brother is first in line.'


Æthelstan watched the flush of anger spread across his son's face, as he had known it would. 'My brother,' Leoric said, laughing bitterly. 'Feralaed is a coward and a queer. You're so willing to defend his place in the line, but where is he while his kingdom burns? Why does he not put aside his chains and his finery and ride alongside us?'

'A king uses more than a sword to defend his kingdom,' the older man said. 'And while you know a lot about war, you would do well to learn about tactics, stewardship, and diplomacy.'


The prince sneered, and the heavy longsword in his hand sliced the air before him. 'Show me the words that can stop a blade.'


'Whether you like it or not, boy, blood is blood, and blood will out. One day, Feralaed will rule the Angles, and your knee will bend to him as an example to every other man in the kingdom.'  Hoofbeats sounded in the far distance behind them, and Æthelstan added, 'That assumes you're still alive to see his coronation.'


The younger man glanced at the column of men in the distance, their family crest leading at the front, and muttered something that Æthelstan did not hear. Then he turned his horse in the direction of the village and said loudly, 'Enough of this. I'll not stand idle while you watch bandits raze our land.'


'Stop, you damned fool,' Æthelstan said, but Leoric would not be deterred. Sword still in his fist, the prince let out a war cry and began galloping towards the village. After a few seconds, he became lost in the smoke and mist below.


It was the king's turn to curse under his breath. Simon and the rest of his militia were less than a mile away and they were approaching swiftly, but Leoric would reach the village in less time than it took them to get to the ridge. Against any lone enemy, Æthelstan knew that Leoric could hold his own, but inexperience might see him ride against multiple enemies at once, and he could not allow his son to die so ignobly. He pulled at the reins, kicked his horse forward and raced downwards into the billowing clouds.


As he made his way across the boggy marsh, the king realised quickly that sprinting the entire distance to the village would be impossible even for a master horseman. At any moment and without warning, the ground gave way to knee-high banks or sudden dips where rainwater had collected deep enough to drown a man who fell from his steed. There was no way to identify the route that Leoric had taken; the ground was far too wet to hold footprints. The mud sucked at the hooves of his horse and with every step they took, they seemed to sink deeper into the mire. Æthelstan wished again and again that he had waited for his retinue before advancing. If he turned back now, they might pass within ten arm lengths of him without ever knowing he was here. An image of Leoric lying somewhere on the field, too badly injured to cry out, spurred him onward.


After a minute or two, the stubbornness of the terrain gave way to a winding trail that moved ahead and to the right. Æthelstan followed it, hoping that his son had found it and done likewise. He thundered onwards, until a shadow reared up out of the smoke ahead.


'You bloody idiot,' the king said, pulling up alongside him. 'If it wasn't for the memory of your late mother, I'd damn well kill you myself!'


Leoric ignored him. 'Father! These aren't bandits! They're Mercians!'


'What?' Æthelstan roared. Leoric pointed to a house framed with fire in the distance. A man lay on the floor in front of the open doorway, dead from a blow to the head. The attackers had clearly encountered resistance. True enough, the king saw the dead soldier's tabard, a yellow cross on a sky-blue background; the bannermark of his rival and enemy, Coenwulf of Mercia.


'This is not a raid,' Æthelstan said. 'It's a declaration of war.'


Leoric looked at him grimly. 'War or no war, nooses will still serve them.'


'The noose is too good for these bastards.'


The king drew his sword and moved round the side of the house where the smoke was thickest. He heard a rumble over his shoulder and then Leoric was past him, his black mare heading for the inn to the west. Æthelstan spurred his horse onward.


The king broke through into clean air in enough time to see Leoric hurtling towards a small group of Mercians backed against the wall of the inn. The one closest to him reacted most swiftly and readied an arrow, but Leoric was quicker still, hacking a wide hole into the man's chest. Æthelstan followed up, but before he could get close enough to join the fight, Leoric had already cut the other two down.


'Not bad,' Leoric said, after a brief pause to catch his breath.


'A good start,' the king said. 'My bannermen will be here soon. We should try to meet up with them.'


'More waiting, father? I thought the battle might stir that old blood of yours a bit. But you disappoint me, yet again.'


Æthelstan looked at his son, and his anger grew. 'Enough then. I've chased you halfway across the kingdom so you get the joy of horsewhipping a few bandits, and a chance to hone your skills in relative safety in preparation for the day you lead an army. If you want to waste that chance, let it rest on your own neck. I'll not throw my life away for you.'


Leoric circled his horse, then growled and disappeared into the smoke once again.


The king shook his head and started back the way that he had come. If his bannermen had travelled the same path that he had, they would advance on the village at any time. The land sloped downhill, so he decided to move around the other side of the inn, hoping that it would give him a better view of the scene before him. A number of pitch-soaked hay bales were smouldering against the side of the building, raindrops hissing around them. The king moved carefully around them and out into a square with the stone walls of a small well in the centre. 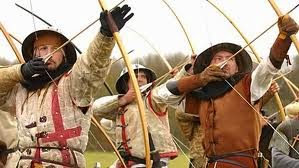 A gust of chill wind lanced the king as his horse moved slowly into the square. A number of bodies lay on the path that led beyond to the hovels in the distance. Blue-clad soldiers made up only a handful of their number. The villagers had paid a far greater toll. Women and children, the elderly, all had been served equally in this bloody melee. Some people had been cut down from behind, their backs and legs slashed. More still lay face down beyond them, their bodies raked with arrows. Only the fletchings stirred, moving slowly with the breeze.

So complete had been the stillness that even the smallest movement in the most peripheral of vision drew the eye. That, and the fact that Æthelstan had not survived a dozen battles in his lifetime by not following his instincts. It was indeed the smallest movement, but he leaned to one side nonetheless and the arrow which would have struck him in the chest glanced off the leather padding on his shoulder.


Æthelstan's horse wasn't the swiftest in his stable, but it made up in sheer vigour what it lacked in speed. A single leap carried it three-quarters of the distance across the square, and the king's longsword did the rest. The archer was cleaved from right shoulder to left hip with a single swing, and both halves of him fell away, soaking the ground with cruor.


So gratified was he with the ferocity of his strike that the king never saw the second arrow coming.
Posted by Kris Holt at 11:39