I know, it's a little late to be feeding back on last year when it's already five days into the new one, but it is traditional amongst writers to look at their past when shaping their prose and it's part of human nature to tackle new experiences by reflecting on what has gone before. So here is 2010, summed up in a few short paragraphs.

Fortunately, I was already past the boundary of being thirty-something, so my age officially holds no fears for me for another few years yet. People tell me that the older you get, the more you become aware of the passing of time, and perhaps that is the case for me in the last twelve months. As I saunter through life at my own practically-comatose pace, my friends and loved ones get married, get divorced, have children, travel to the furthest corners of the globe (and come back, with stories about how we can't really complain about the weather here) and...do things. I have allowed my life to become too much of a spectator sport in 2010, and this will change in 2011.

This is not to say that the time I have spent has been wasted. I have laughed, loved and followed the news. I have read new things, listened to new songs, discovered new things that I enjoy. I am a newly qualified accounting technician. I have gone from a vague dream of wanting to one day own a fishtank to a fully-fledged aquarist in a few months. Those same fishtanks were paid for with poker winnings, and to those who say I could have earned the money far more quickly stacking shelves, I am given to understand that doing that in my underwear would be frowned upon. 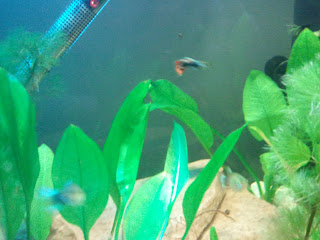 To continue the fish theme, I have also eaten a lot of sushi. But then, I can always eat more.

2010 has seen unremarkable people do remarkable things. By the mere fact of their survival, 33 Chilean miners became the focus of media attention around the world and have gone on to become internationally known and acknowledged as a symbol of hope and mankind's ability to overcome seemingly impossible odds.

My goals are simple and small. I have set myself three targets for the coming year. In no particular order, these are:

1) Travel outside Europe. This will be tricky without money to do so, but thanks to the encouraging efforts of a couple of good friends and a degree of monetary self-control, I'm hoping to visit Egypt before the summer.

2) Learn (another) new hobby. I want to become a competent photographer and this year's poker winnings will be diverted towards a second-hand starter camera of real quality so that I have the tools of an interesting new trade.

3) Learn a little more about love. Sounds silly (and it is, a bit) but 2010 has been a year of lovers rather than love, and I want to get out of my comfort zone and have something to smile about during 2011.
Posted by Kris Holt at 21:59