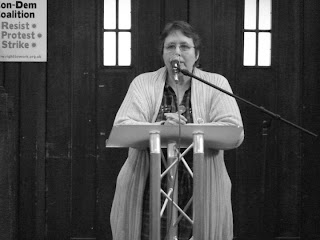 Four Thousand Words is pleased to present another guest blogger and fellow local government employee. Karen Michael is a UNISON steward and native of Indiana, USA.

Great Britain – the country that brought you the industrial revolution and Fred Dibnah's lovely obsession with steam trains faces the closure of the last factory where workers have the skills to manufacture locomotive rolling stock.

This goes to the heart of the question of what makes a nation state viable and what the impact of allowing essential industry being manufactured at a distance: will we always be able to afford the energy to import these goods? Is this reliance on trading with companies who are at significant geographical distance not an unnecessary exploitation of a limited energy resource? Could we, inadvertently, be putting our own neighbourhoods at risk? 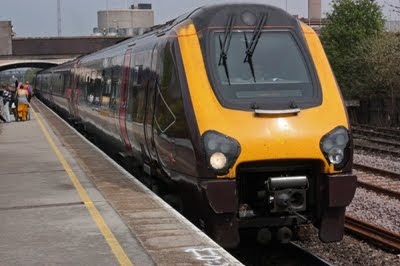 Sustainability is commonly thought of as being an issue relating to the provision of a continuing and generous supply of energy in a way that does not loot the natural resources nor pollute and cause global warming or other environmental damage. Part of the way sustainability can be enhanced is by limiting the length of manufacturing supply chains.

Back on 30 October 2006, journalist John Vidal wrote this in The Guardian:

'The biggest ship afloat is due to arrive in Felixstowe, Suffolk, this week on its maiden voyage from China with nearly 45,000 tonnes of Christmas presents and fare for the holiday season.

'The Emma Maersk, which is 400 metres long (1,300 ft), 56 metres wide and 60 metres tall, and dubbed the SS Santa, will unload more than 3,000 containers for supermarkets and stores before heading to mainland Europe.

I well remember the reporters on Look East salivating with glee over the cocktail shakers that that famous Christmas-loving nation, China, sent to us in the spirit of the season. Had Great Britain lost the technical ability to manufacture Christmas tat?

Of course not! It was simply that the monetary cost of a British-based labour was much higher than that of Chinese-based labour. However the actual cost of the full productive and delivery cycle of this merchandise was not reflected in the price of the goods we purchased from that charitable enterprise, the “SS Santa.” The market didn't factor in the cost of the ecosystem damage that is caused by such a long supply chain. It also misses the fact that greenhouse gases produced in China damage the ecosystem just as surely as those pumped out by Manchester industries; both the manufacturing and shipping costs of environmental damage were missing from the price tag attached to the cocktail shakers. Economists call such hidden costs 'externalities.'

Extending this principle to the matter of Bombardier and the construction of rolling stock, it is therefore advantageous to manufacture essential goods as close as possible to home. If GB PLC (as it could be described in a capitalist context) is to remain viable, it is imperative that the supply chain either be as short as possible or are kept at home for crucial industries. The capacity to build infrastructural technology is a matter of profound national, regional, and local interest. The real argument is – yes – Bombardier should be cranking out rolling stock as quickly as its assembly lines possibly can; AND so should Siemens. There is a desperate world wide need for green-friendly mass transport and the improvement and extension of the rail stock and lines is one rational way to begin answering that requirement. The competition between these two manufacturers is an illusory necessity created by an absurd system of capitalisation that bases all decisions on how much paper (money) is created by a series of transactions and manufacturing rather than the usable values of those products.

In addition to the ecological and viability issues, the labourers of Bombardier are victims of the same capitalist system that is currently creating economic mayhem in Greece, Ireland, and Portugal: the credit rating industries. Siemens, German-based, has a triple-A credit rating; Canadian-based Bombardier has a B+ credit rating. Therefore when Bombardier borrows money, it pays a higher interest rate than its competition. Without regard to quality of product, the workers at Bombardier are disadvantaged in this ridiculous marketplace because of the shenanigans of their capitalist masters and their competitors, and of course, the ridiculous zero-sum environment in which the current regime forces them to operate. 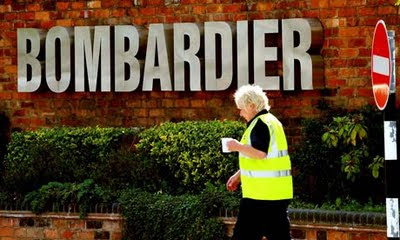 Bombardier, the only UK-based manufacturer of locomotive rolling stock is facing the real possibility of closing because the UK government has found a 'better value' (for that, read 'cheaper') provider in the corporate person of German-based Siemens. The externalities (remember that word for the uncounted costs) in this case includes the costs of transporting the new stock to Great Britain; it also doesn't factor in the domestic externalities: unemployment (1,400 job losses – enjoy your new customers, Ian Duncan Smith!) and, as significantly, the potential loss of an entire and critical industry.

Bombardier is a Canadian-owned company located in Derbyshire. However, labour gives value to the product, not some multi-story office building in Montreal. Workers living in Britain must be allowed to retain the skills needed to keep the British region of Europe as economically independent as possible; it is a logical and necessary part of the road to sustainability and sensible stewardship of our planet's endangered resources. Saving Bombardier is a beginning of a potential strategy to ensure both the longer term survival of Great Britain and our larger human family. This is not protectionism or xenophobia: rather, it is common sense.

Messrs. Cameron & Clegg say they want GB to be a country that 'makes things'. Perhaps the first thing they should attempt to do is make sense of their own policies.
Posted by Kris Holt at 19:45