The ants were out in force today in London. They crawled over the kerbs and pavements in their millions, threatening an invasion in the heat.

They have obviously had a bumper year. Some of them were two or three centimetres long and the generals had wings with crinkly translucent edges, tied behind their backs but ready to be deployed at a moment's notice.

Of course, central London is not a good place to be an ant, and simple foot traffic inflicted a terrible toll on the troops. Their corpses, crushed and splayed, were littering every second inch of ground, and yet still their numbers seemed endless.

Those of you who remember the halcyon Amiga days of a nineties childhood may remember a computer game called 'It Came From The Desert', about a small town in America which is invaded by giant ants. I was reminded of its magnificence today as I visited the British Library, which has an excellent exhibition about the origins and cultural influence of Science Fiction.

As well as giant ants, the show takes in Arthur C Clarke, HG Wells, and George Orwell, as well as contemporary influences like China Mieville, Lauren Beukes and their equivalents from other cultures around the world. The list of subjects explored goes from mankind's first imaginings of valleys full of dragons and seas full of hideous monsters, takes in trips to the moon via catapult or on the backs of swans, little green men with laser guns and mind-bending powers, and evil police-state governments supporting Machiavellian dystopias. At the exhibition, you can shake hands with robots and absorb social commentaries from the last two hundred years. Plus of course, the exhibition is free, so check it out if you're in the area.

There is something absorbing about London. The sheer volume of people is fascinating for a people-watcher like myself. Today I was able to stroll through the parks around Russell Square and Montague Place at my leisure in the warm evening sunshine. Along with Camden Market on a Sunday afternoon, it's definitely one of my favourite parts of the city. I even discovered for the first time today that the Brunswick Centre nearby has an arthouse cinema, which wouldn't be worthy of mentioning if I hadn't walked past it a hundred times in my life before today and never noticed. 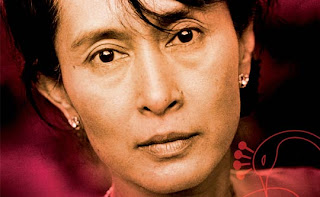 Of course, I don't typically spend my weekdays in London and I was there for business rather than pleasure. Today was my first experience of being a regional international committee member - this won't probably be of much interest to anyone else, so I won't elaborate too much but just say that each of us is assigned a key area of interest and work, and mine is Burma. The charity we're working closest to is the Burma Campaign UK and I can expect to be learning a lot more about the military dictatorship there and the growing demands to free political prisoners as well as the life of Aung San Suu Kyi. It should be very interesting for me and hopefully I can bring something constructive to UNISON's involvement in the country.

One final bonus of having a couple of hours in London before the train back is that I get to indulge in one of my favourite things - food at Yo! Sushi! 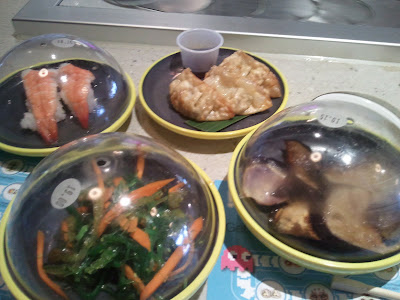 I love everything about Yo! - the explosive colours, the tiny touches in the presentation, the single edamame bean that they always slip into salads, the way that you watch the food coming past on the conveyor belt with anticipation and then move away from you with regret. And of course, this is before you actually get to eat it. I honestly believe that I could eat sushi every day of my life and never get bored.
Posted by Kris Holt at 22:40