I have to admit, I've never met a banker socially, but I like to think that despite their current position as collective national pariahs and convenient scapegoat for neoliberal politics, bankers are human somewhere. I watched Stephen Hester at Royal Bank of Scotland reluctantly forego millions of pounds in bonuses with a degree of grim satisfaction but while seeing Fred 'the Shred' Goodwin stripped of his knighthood is mildly amusing, seeing him occupying press columns next to luminaries who have suffered a similar fate - Robert Mugabe and Nicolae Ceasescu are two prominent ones - is slightly disturbing. Odious they may be, and indirectly responsible for much misery, but bankers are not in the same category as those responsible for genocide.

So put yourself in a banker's shoes - do you take the bonus, or not? I serve the public and so in my current role, bonuses are not an option. If they were, I would snap them off at the wrist. But then, I don't receive a six-figure salary offered, so maybe I would feel differently if I did. I'm tempted to suggest that enough is now enough - the triumphalism surrounding the humbling of individual bankers sickens me as much as the bankers themselves, and I feel the time has come to stop focusing on individuals and start dismantling the culture that surrounds executive pay in this country.

Fortunately, there are still others out there who very much believe in sharing the wealth, and Australian transport tycoon Ken Grenda is clearly one of those. 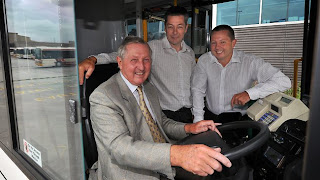 Mr Grenda sold his bus company to rival outfit Ventura this week for an unspecified sum. Immediately following the sale, the company announced that its employees would each receive a share of the proceeds based on length of service. According to the Australian news outlet Herald Sun, the total sum of payouts is worth £10 million, with some individual payments worth over £100,000.

So here's an idea that would put the cat among the media pigeons - rather than shelling out £2m to Stephen Hester, who clearly won't be losing sleep over it - how about dispensing it instead to the low-paid employees at RBS, where it might actually go to use stimulating our economy?
Posted by Kris Holt at 20:34