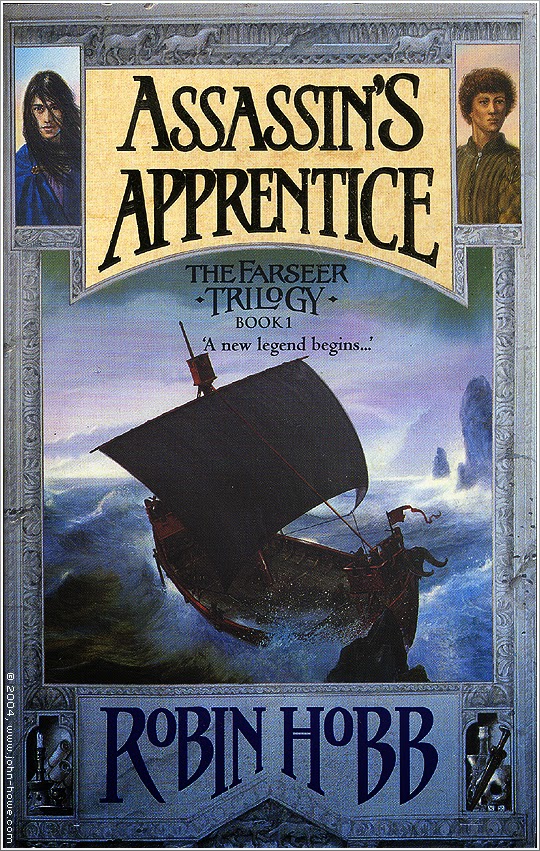 'Assassin's Apprentice' is the first book in the Farseer Trilogy, one of several fantasy series' by Robin Hobb.  Hobb is a pen name for Margaret Ogden, who has written ten other books under alternative names, as well as a plethora of short stories and collections.

I read Assassin's Apprentice as the designated monthly novel of the Norwich SciFi and Fantasy book club, where it received ratings of between 7 and 9 out of 10.  I tend towards the lower end of that spectrum, but every fantasy novel I read these days is compromised unfairly by due comparison to Game of Thrones.

'Assassin's Apprentice' follows the story of the upbringing of royal bastard Fitz, sometime son of the King-in-Waiting, Chivalry Farseer.  From his earliest memory of being dumped on the royal doorstep, Fitz makes a home at Buckkeep Castle, including friends, enemies and lessons.  When he reaches his teenage years, King Shrewd moves him from the protection of stablemaster Burritch to the care of the Royal Assassin.

The long years of Hobb's own long apprenticeship are immediately apparent, with her words bringing to life a colourful kingdom that immediately felt very real.  Each chapter begins with a telling of a minor matter of history or intrigue about the Six Duchies, and this helps to bring them to life.  A reader can fully appreciate Buckkeep, 'an end place for a journey, a panorama of noise and people', the kingdom of Jhaampe, 'best compared to chancing upon a patch of crocus, pushing up through snow and black earth' and the salty spray that heralds the unwelcome arrival of raiders from the Outislands.


Less engaging is the interaction between characters, and the necessity of the POV means that you typically see more of the characters in relation to Fitz, rather than as a complex web of interrelationships that bind characters to one another.  This is not a deal breaker by any means, but inevitably the narrative suffers in comparison to Game of Thrones, which has the luxury of multiple POVs to build greater complexity.


That same POV is guilty of other sins as well.  Fitz narrates directly, which would give him scope to grip the reader, but there is a notable degree of drag in many of the scenes, and lulls both before the action truly begins and whenever there is even the most scant opportunity for pause.  At one point halfway through the book, Fitz mentions the killing of many men in the service of his king, but the details are glossed over within a sentence and we are instead shown an instance where he employs diplomacy and his knowledge of animals to defuse a relatively minor matter.  There is no doubt that this was a deliberate decision, but for me it undermines the premise of the title and left me distinctly underwhelmed.  I felt like the real action was happening somewhere off the page.

There was also a certain sense of disappointment about the Wit and the Skill, trite names for important concepts within the novel.  That the chief scourge of the Kingdom, the raiding Outislanders, have the ability to somehow dehumanise their victims, making them little more than zombies, is an interesting idea, but the name they give to this process - Forging - somewhat undermines the fearful nature of the concept.

A love story is hinted at, and then seemingly disregarded.  Obviously, this is something that may be explored more fully in future books, but it contributed once more to a feeling of a story that falls rather flat in the wrong places.  Fortunately, the supporting cast is more well-rounded than Fitz himself, adding emotional depth that the main character fails to supply.  There is one particularly satisfying moment when a notably foul character receives a lesson, and I felt genuinely cheered by this.

Overall, 'Assassin's Apprentice' is an extremely well-written effort set in a simple but effectively designed world.  It is clear that Hobb can create absorbing characters, but I felt she could have done more to swiftly capture the events that drive the narrative and engage me as a reader.  While I would be happy to read more fiction set in this world, I wouldn't rush to read more about Fitz.

Robin Hobb's next novel, 'The Fool's Assassin' (book 1 of a second trilogy about the same main character) is set for release in the UK in August 2014.
Posted by Kris Holt at 23:19