My Travels Through Imaginary Lands, Pt 5.

By mid-morning, the residents of Pitchek had roused themselves from their collective hangover and they all seemed to be milling aimlessly around the town while I waited at the flagpole for a carriage to take me east.  With the holiday weekend in full swing, the soldiers from yesterday's parade were already out in force, drinking openly in the square, and those same bordellos I'd been warned off before had their doors open and bead curtains pulled discreetly across the entrances.  The beads clicked merrily with the warm breeze.

Yesterday, in the dusk, I'd evidently missed the sapphire-and-alabaster bunting that had been strung across the streets and between the houses.  Some had inevitably fallen casualty to excessive frivolity and the roped triangles of cloth tied themselves into despairing knots that drooped in the dust.  Those that remained added much-needed threads of colour to the sandy visage of the town.

Unlike the peasant carts I'd already seen, the passenger carriages were far grander affairs.  Rose-coloured Vaariewood panels stretched across wide iron cages the same shape as the flaxseed pumpkins that they brought across the western border and crushed here for lamp oil.  The vertical boiler at the centre fed two twin-cylinder engines, each of which powered a pair of wheels via chain and sprocket mechanisms.  The front wheels turned about a centre that lay on the extended line of the back axle, allowing for a wide, safe turning circle and a top speed reputed to be in excess of twenty miles an hour.  Lower frictional resistance meant that the Ondian steam trains could travel far more quickly; however, they were of course restricted to their tracks.  Personal vehicles were always regarded suspiciously in Ondia, where any deviation from collective commitment to societal development was seen as vulgar and pretentious. 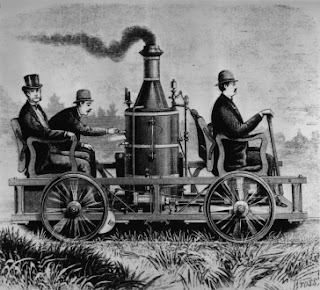 There was an evident degree of confusion in the square around which carriage was to go where; while my own countrymen would have had a rigid timetable and been tutting as they checked the seconds off on their pocket watches, here there was a delicious sense of anarchy.  The drivers called destinations out to one another, and there followed joyous negotiations and loud appeals to the crowd for customers.

I had been lingering around the fringes of the crowd for some time, when one saw me and pointed.  'You!  Ondian!  You go home?  Hamrh, or further south?'

There were a few laughs and a sense of general agreement.  Out here on the plains, they probably saw hot sun most of the summer long, but there was precious little time to sit and enjoy it.  Pitchek was a worker's town.

I'd expected the coachman to move onto someone else, but he stayed with an eye on me, clearly having me pegged as someone here with a long journey in mind.  'Vairin, then,' he said.

Vairin fitted the bill; it was on the coast, but it was a proper resort town rather than one of the working ports further south.  If I chose, from Vairin I could catch a ferry around the tip of the continent, travelling around the spurs of land that formed the back legs of the Nebran Barking Dog (looking south to north, Ondia was the tail.)  If I left now, I would be there early afternoon and would have the chance to wander.  I could soak up some of the sea air and salty atmosphere that I was missing in this desolate chalky outpost.

The coachman beckoned me on, lifting my bag over the heads of the crowd members who turned in curiosity at the sight of my beard and dark creased suit.  The inside of the coach was pleasantly cool, though it would soon became apparent that the boiler in the centre of the carriage hissed incessantly throughout the journey, meaning one had to shout to make oneself heard.

I was the first passenger to board for Vairin, and I was joined in due course by two elderly tourists from somewhere to the south-west who had managed to get themselves lost looking for the coast, a pair of dark-eyed soldiers who looked like they wished they were anywhere else, and last but definitely not least, a beautiful young Ondian woman with shapely legs inside leather trousers and a fur-lined cloak clasped at the neck over a plain, Merin-cotton blouse.  She caught my eye as I caught hers and coolly held my gaze; so as she would have immediately recognised my nationality from my beard, so I could tell hers from her violet eyes and dreadlocks.

She nodded back to me and returned the smile.  I looked around for her baggage and at first saw nothing.  Only at second glance did I see a vacuum-sealed flatpack bag pressed into the space behind her.  As if reading my mind, she reached back and produced a smooth glass box, the perfect size to hold between two small hands.  It was perfectly see-through, and I noticed that the inside of the box was moulded into a shape not unlike that of a spiralling, curved bottle.  At the very bottom of the mould lay a small pile of dust, no more than an inch deep. 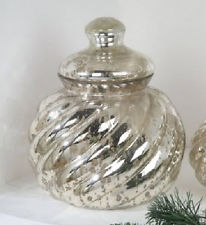 It was an Ondian funeral box.  'Oh.  I'm very sorry for your loss,' I said automatically.

'Thank you,' she said, her lips thin and sallow.  Beyond that point, I expected her to say no more to me, and I wouldn't have presumed to have forced further conversation upon her, particularly at a time of grief.  But quite unexpectedly, it was she who seemed to have the desire to break the silence.

'Sir,' she said, and it was the kind of sir that implied at best jokey, token respect, 'you'll forgive me, but I'm sure I've seen your face before somewhere.'

I shook my head.  'That seems unlikely.  I'm no-one particularly special.  Just a simple traveller, making my way to the coast.'

'Oh, of course...as you say.  I'm sure I must be mistaken.'  She scratched a spot on her cheek with a single fingertip, and once again, I expected conversation to end there, but she persisted.  'Still, your face really does look familiar.  It's the shape of your nose.  Wide.  Handsome.'

Immediately, she looked as though she regretted the last word and bowed her head.  I was more than a little nonplussed, not least because she was so stunning in her own right.  The soldiers glanced at me and then sulked quietly to one another, perhaps jealous that she hadn't made conversation with them instead.

More to end the lengthening sense of awkwardness than because I wished to know, I pointed to the box that she clung to tightly.  'Is it a friend, or relative?'

'My father,' she said, by way of explanation.

'His box looks quite amazing,' I said.  'The wave in the glass shows impeccable craftsmanship.  He must have been a man of some importance.'

'Hernan Sera-Stahl,' she said.  'He was a linguistic anthropologist, a man of some repute.  Perhaps you've heard of him?'

Hearing the name was a tremendous shock to me.  Not only had I heard of Sera-Stahl, I had worked with him on a number of projects, the latest of which had been a study of dying languages in central and western Nebra. He was - had been - a quiet, cultured man, fond of sports, the scented inhalant known as cerba, and cruorweed tobacco, which he had smoked relentlessly by the pipeful.

'I'm...greatly surprised.  In fact, quite shocked.  I'm sorry.  I knew your father well.  We worked together at the ministry some years ago.'  The girl looked momentarily startled, and raised a hand to me.  I had the realisation at the exact same moment.  'Of course, that would make you Taly...Taly Sera-Stahl.  We only met briefly.  At the time, you were still at the academy in Hechda.'

'I've been finished there for eighteen months now.'

'Yes, and your father had written to me to tell me that you qualified with distinction.  One of the top five in your field in the country, he said.'

She was embarrassed now, but smiled again despite herself.  'Cultural history isn't a popular subject back in Ondia.  A lot of people tend to be fairly...introspective in their inclination.'  I could tell she'd chosen her words carefully so as not to risk even the smallest chance of offending me.  For what it was worth, I couldn't have agreed with her more.  Many Ondians had a strong cultural appreciation for their military history without actually being able to tell you anything about it.  In these fearful, feverish times, this was a useful political crutch for the ministry.

'Like father, like daughter.  He was incredibly proud of you.'  The words flowed automatically and they were no less true for that, though I was still startled that my old colleague had died so recently and no-one else had thought fit to tell me.

Taly looked at me for a moment, opened her mouth as if to respond and then shut it again without doing so.  She seemed to think deeply on a matter for a second or two, as though unsure if she was asking an appropriate question, before taking the chance and doing it anyway.

'You'll forgive me - this is terribly presumptuous - but my father has had no ceremony yet to mark his passing, and as an old colleague of his, would you perhaps be interested in celebrating his life here in Rhigo?  Of course, there'll be a formal ceremony when I return him to Kassium, but he identified strongly with the continental way of life, and I can't help thinking that a Rhigan celebration might be more appropriate for him.'

She was absolutely right.  While he might have seemed typically Ondian in the stuffy style of his dress and the relentlessly formal manner of his professional bearing, the Herman Sera-Stahl that I remembered was a tenacious man, with a keen, jocular wit.  Having already gone through the process of being freeze-dried, crushed and placed in the traditional glass container, I saw no joy in a final ceremony in the cold, gray halls of his alma mater.

'I would be delighted,' I said.  At that moment, the carriage hissed like a sea-kettle and sprang into life.