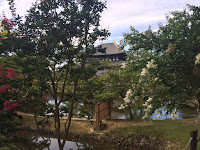 Cicadas, everywhere, wherever there are trees.  The first time I hear them, walking from Daimon station to my hotel, I think that it's the sound of industrial machinery somewhere in the distance.  These fearsome little bugs whine, whoop and wail throughout my adventures, providing me with a looping soundtrack that I miss immediately upon my return to England.  I'm conscious of the fact that my photos cannot capture their roaring vigour, so when the noise is at its loudest, I try to take video instead.  Unfortunately, I can't explain to people what they are listening to, as the cicadas completely drown out my attempt at commentary.

Smack in the middle of one of Tokyo's most vibrant districts, the Meiji Shrine typifies everything that I love about Japan's iconic monuments.  The gorgeously constructed wooden gates (known as torii), the wide, sweeping pathways, and the ultimate stillness of the shrine itself, where even the aforementioned cicadas whisper rather than sing.  Shinto is an ancient religion that reveres the spirits (or kami) which live in natural places. 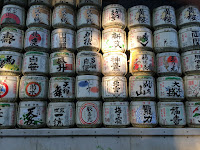 There can be fewer places more in tune with Japan's beating heart than Meiji itself.  Named for the Emperor that prompted Japan's restoration at the end of the eighteenth century, the outer precinct houses a collection of murals, and the pathways are lined with barrels of wine and sake which have been donated to the shrine.  You can get married here if you wish. 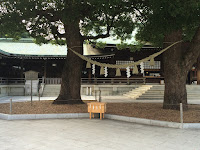 The inner precinct houses a treasure museum, and visitors are encouraged to buy a prayer board, which is about the size of an airline luggage tag.  The expectation is that you write your wish upon the board and tie it to the ropes strung between the trees.  I quickly survey what visitors are wishing for - health, love, money, Christiano Ronaldo to join Arsenal.  Each of us gets what we want from the process.


A minute's walk from the entrance to the shrine, a procession of smiling teenagers leads us to the top of Takeshita Dori, and then we are down into the colourful madness of Harajuku.  The area is a pedestrian expanse of small independent shops selling all sorts of tourist nik-naks and branded clothing.  In the busy times, simply standing still or lifting your arms in the middle of the street is impossible. 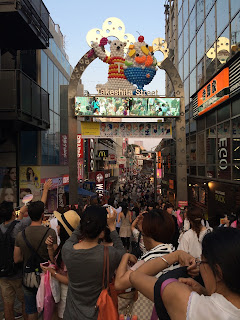 It struck me here that city living in Japan would not suit someone with social phobias.  Nearly 14 million people live in the city of Tokyo, but another 20 million more live in the metropolitan surrounds.  The sheer density of people here is matched only by their friendliness and curiosity.  I slip through the crowds, and badly in need of a way to quench my thirst, I opt for the first cafe I find.  It is a Spongebob Squarepants cafe, complete with bright yellow plastic furniture.  Embracing the surreal nature of the moment, I order a mango frappe.

Another thing that I noted here is the frequently bizarre nature of English slogans, which are everywhere in Harajuku.  So many times, I see random phrases on shirts or as the name of shops.  Who decides to call their fancy clothing boutique 'Store My Ducks', or wear a t-shirt that says, 'Born free, eat my cool'?  If I ever want to make a shitpile of money in Japan, I'm going to write an algorithm that cribs random phrases off the internet and prints them onto t-shirts.  Unless someone else has already had that exact idea, which is a distinct possibility. 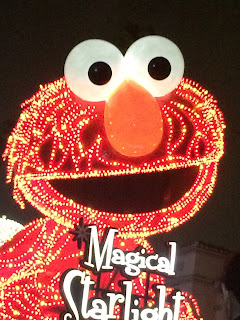 Shortly after leaving Tokyo, I spend a short time in Osaka, where I visit Universal Studios.  I freely admit that I'm not really a theme park person, being neither a fan of thrill rides or of long queues, both of which predominate here and at the Disney Parks in Maihama.  The Universal Park does have a fairly spectacular parade to end the day, which culminates in this 'last thing you'll ever see' shot of a fifty-foot Elmo float descending onto me.

I've heard it said that Japan is an expensive country, but that didn't fit with my experience at all.  While I was there, a debate was raging on the news about the 1000 yen/hour minimum wage (about £5/hr) and more than once, I was able to eat a sound three-course meal with sake for under £20 a head.  Try doing that in central London!  Next time, I'll talk some more about food and souvenirs, about my faltering attempts to master pachinko and about a too-successful visit to Akihabara, where a stint on claw machines nets us enough plush toys to exceed our baggage allowance.
Posted by Kris Holt at 23:31 No comments: Links to this post

The Warm Winds of Kyoto - Part One

I arrive in Kyoto by shinkansen in the early afternoon. Japan is famous for many things, but up till now, I'd heard little mention of the summer weather. Europeans desiring guaranteed sunshine flock to Spain, Florida or the Caribbean, but I'd never previously considered August in Kyoto. When I step off the train, it's 39 degrees centigrade, with humidity at 90+ percent. The winds are even hotter. 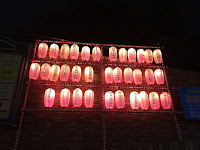 Not for the first time, I'm pinching myself that I'm here at all. I've already spent a week in Tokyo, where I've posed with Hachikō, watched the tuna auctions at Tsukiji and visited the magnificent Meiji shrine near Harajuku. One bullet train journey later and I'm creeping through the whispering bamboo forest at Arashiyama. In two days time, I'll be leading a procession of deer to the largest Buddha in the world. It's every bit as bizarre and magical as I'd hoped.

I won't get ahead of myself.  I get off the plane and am instantly bewildered by the choice of drinks in the airport (a bottle of Pocari Sweat for you, sir?)  I find myself making notes about the tiny things that intrigue me.  Within hours, my notepad is full and I am scribbling in the margins. 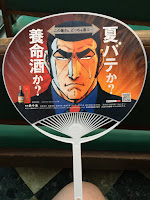 Tokyo is a rush of colour, but its inhabitants are a monochrome palette.  From early in the morning till late in the evening, weary salarymen are the city's stock in trade.  In their white shirts and black trousers, each one is barely distinguishable from the next as they flood across the street at Daimon.  I try to follow them, and immediately learn that crossing signals are observed impeccably by pedestrians, but drivers treat them only as gentle suggestions. 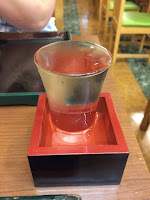 Past the statue of Hachikō, the bright billboards and electronic screens at Shibuya turn night into glorious day.  Here, where the language barrier makes subtlety of meaning impossible, advertising is stripped down with amusing results.  On one wall, a cat recommends a particular brand of washing powder.  On another, I am offered a product made from placenta that will make my skin sparkle like snow.

The Japanese metro systems are clean, efficient and easy to understand once you have grasped that certain lines are owned by different companies.  You might make the mistake of buying a ticket for the wrong line once, but you'll learn quickly.  Compared to England, the price of everything, from food to travel, seems ridiculously cheap.  In no time at all, I'm eating lotus root tempura and drinking more gekkeikan than is good for me.  In one location, they stand the glass in a wooden box, and fill both to the point of overflowing. 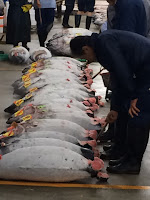 Taking advantage of my distorted sleep pattern on arrival, I head to Tsukiji fish market on day one, only to find that arriving at 5am means that I am too late to join the organised tours.  Three a.m., I'm told.  Three a.m., where I queue a day later in a sweaty box room with fifty other curious-and-slightly-crazy insomniacs, all for the joy of watching gruff men cut the heads off flash-frozen fish with a bandsaw.

There is something quite horrific and yet still deeply compelling about Tsukiji, and I fear that words may never quite do it justice.  The tuna are laid out in slick rows, looking more like munitions than creatures that were alive mere hours before.  Their tails are carved open with crowbars so that buyers can sample the product ahead of the auctions.  Tuna is big business here, and individual fish can cost the equivalent of thousands of pounds. 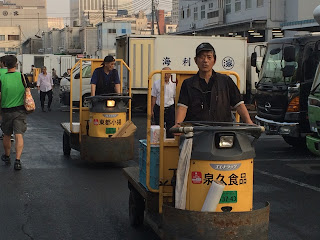 Outside, you are led across a courtyard which is a hive of trucks, forklifts and other industrial vehicles which sweep around you in a mesmerising mandala.  There seems to be little in the way of earmarked paths, and people, bicycles and other vehicles compete with one another for first access to available space.  I am left amazed that serious injuries are not a daily occurrence.  On my near side, a veritable mountain of empty boxes is bulldozed into a rubbish pile. 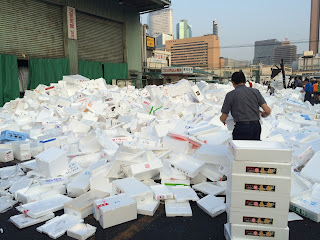 If it seems for one moment that I regret my trip to Tsukiji, I can only say that it is something that has to be seen to be believed.  I recommend it both as a cultural experience and so that you can see how much effort really goes into getting food onto your plate.

On the way out, numerous market stalls are selling
products fresh off the boat.  In the spirit of adventure, I buy a sea urchin off the griddle.  The dark spikes are rended by a single slash of the fishmonger's knife, and I am into the flesh, which is creamy, fishy and fruity all at once.  As with the market itself, they're an acquired taste, but I suggest that you give them a go.

The other great thing that I got from the market was a new idea for a writing project - but I'll let you in on that another day.

In part two of this travelogue, I'll share with you the joys of chirruping cicadas, Shinto rituals and a fifty-foot Elmo.  Sayonara for now!
Posted by Kris Holt at 19:30 No comments: Links to this post