Current read: 'No More Rejections' by Alice Orr. A tidy little guide from a contemporary editor in the fiction about the common mistakes made by prospective authors. It's handy for reference purposes and entirely dispiriting for the Nano author, who doesn't really have the time for quality when quantity is the initial goal.

Current music: The new cover of 'Please, Please, Please Let me Get What I Want' by Slow Moving Millie from the John Lewis Xmas advert. Though the small child is a bit on the creepy side. Also, 'My Body is a Cage', another cover from Peter Gabriel that's better than the original.

Current TV Shows: Liking the new episodes of 'The Simpsons' on Sky - how much longer can that show go on for?! Also enjoying 'Bones' - though surely it has to end now that Booth and Brennan are about to spawn.

Current food: Morrisons have a neat little range of tapas style dishes that are always in the cheap aisle as no-one else ever seems to eat them, which is a bonus. Plus I like cheese...

Current drink: Red Stag Black Cherry Bourbon. Took a bottle of this to a friend's house for a chat a week ago and came back empty-handed and wiser. And a bit drunk, no less.

Current favourite blogs: Diary of a Benefit Scrounger by Sue Marsh - a member of the Leftie twitterati who campaigns religiously on health and disability issues. Sue is an inspiration and I challenge anyone to read her posts and not feel affected by the things that she says.

Current lust: My first ever poker love, Vicky Coren, just finished as the runner-up in a major international poker tournament. This follows on from her major win a few years back in the EPT London event that remains a highlight in her glittering career. Oh, and yes, she's on TV, and writes books too.

What is it about smart women that is such a turn-on for men? It has to be that feeling of knowing that you always have to be the best that you can be to keep her interest.

I'm very fortunate that my girlfriend Melissa is a very smart and successful lady in her own right, so I'm a lucky man indeed. Current bane of my existence: The unexplained stomach pains that are, according to the doctor, probably nothing serious. That's alright then. I'm looking forward to confirmation of exactly that in the test results I get back in due course.

Current excitement: Ten thousand words is all that's left before I complete my first ever successful Nanowrimo! It'll still be a lot of work before I have something of a publishable standard, but I've really enjoyed the process and I look forward to redrafting it afterwards.
Posted by Kris Holt at 23:44 1 comment: Links to this post

How the Beckett Reform could save the Labour Party (and maybe even the UK...)

Political manifestos are dangerous things. In the run up to an election, a party can promise not to privatise the NHS (Conservatives), to oppose the introduction of student fees (LibDems) or pledge to oppose Free Schools (Labour). Then when attention is no longer focused on what you said, you do a nifty little u-turn, and no-one remembers what you said (or in Nick Clegg's case, what you look like, or do.) 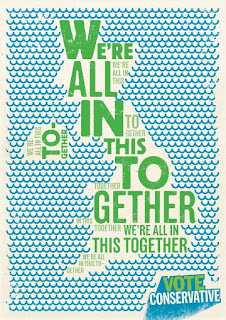 But then, should we really be worrying about a few political white lies at this time? After all, the UK is in something of a crisis at the moment. Even David Cameron admitted this week that his plans for cutting the deficit have turned out to be ineffective - not that he seems to have any alternative ideas about how to improve matters, or any intention to use someone else's.

One major white lie that could yet resonate around British politics is the rapid rethink by all three major political parties, who were all supposedly keen on party funding reform pre-election, but have since changed their stance.

The reason why the ConDem coalition has had so much opportunity to force through their madly regressive policies is the failure of the Labour Party to offer a viable alternative to Conservative policies. This is partly due to the control that the media exercises over public opinion, but here at Four Thousand Words, I dare to be different. So here it is. The UK's deficit is no longer the major issue that should be on people's minds - instead, our major problem now is the lack of growth. And we need to tackle this, sooner rather than later.

Labour face a challenge to become relevant again, and they can't rely on disenfranchised Liberal Democrats to bring the ball back around to them. A strong opposition makes for a stronger challenge to government, which makes for a government that is more inclined to listen to the people. Hence, it is in everyone's interests that Labour gets its act together.

I should point out that I don't intend to go into detail here about state funding of politics or the capping of donation limits, though the fact remains that the latter suggestion, if implemented, really would put a cat amongst pigeons. Instead, I want to focus on Labour's relationship with the major trade unions, which is showing increasing signs of strain in the run-up to the planned public sector strike on November 30th.

Unlike the Conservatives, who receive a high proportion of their party funding from wealthy financiers in London, Labour funding comes mostly from trade unions, which means those same unions have to accept some of the blame for Labour's lily-livered showing in opposition. By not applying the necessary pressure in the media, Labour have shown themselves to be tremulous rather than terriers, and hence this is why you will often hear people say, 'but there's no-one worth voting for!' 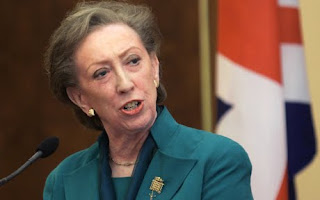 Step forward, Margaret Beckett, a Labour Party member and former MP who has come forward with the idea that trade union members, rather than being offered the chance to opt-out of paying a share of their subscriptions directly to the Labour Party, should instead be asked if they wish to opt-in. It is a small change that could decimate the funding that the Labour Party receives.

Why would this be a good thing?, I hear you shout. Will it not cause the Labour Party to sink even further into irrelevance and stagnation, giving the rheumatic billionaires who run our banks yet more opportunity to decimate our once Green and Pleasant Land? Well, it could...or there's a chance that it could act as a catalyst for reform of the way the Labour Party is run. 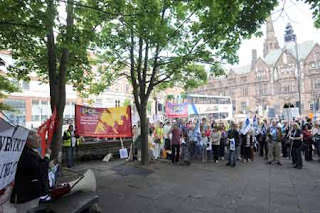 For their part, the trade unions have to do more to tackle the notion that seems to be ingrained in private sector workers - namely, that the public sector trade unions are somehow promoting superiority and privilege. Instead, by creating stronger ties with the private sector and engaging those same people we have already discussed, the link between the trade union workers of tomorrow and the Labour Party could once again be restored. They could yet collect us altogether in one place to boot out these millionaires without morals.

The noted Conservative writer and politician Edward Bulwer-Lytton once said that 'a reform is a correction of abuses; a revolution is a transfer of power.' Bulwer-Lytton may have been making a distinction, but in the case of the modern Labour Party, he has unwittingly identified how one could be the catalyst for the other.
Posted by Kris Holt at 16:04 No comments: Links to this post 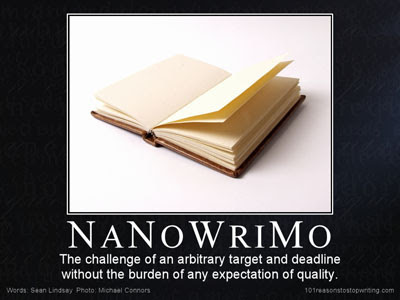 Apologies to my regular readers who haven't seen me post for a few weeks - I'm afraid my writing muscles have been well and truly stretched with this November's National Novel Writing Month project, but I'm happy to confirm that there are now 37,000 of the required 50,000 words in place, and I expect to finish with a day or two to spare.

Of course, being a rushed first draft, the book will need a lengthy rewrite, but much of the material will be of a decent standard so I'm hopeful that once I have a confirmed structure for the finished work in my mind and have tidied up the core areas, it should just be a case of spit and polish in the slightly more woolly parts. I expect that I'll have something of a publishable standard by Summer 2012.

I'm considering several different options for what to do next - purely for vanity reasons, I really want a proof copy of my work, and then I can send other copies to suitable publishers (it's a sci-fi one again). In the knowledge that new, high-quality novelists are a rare and distinguished breed, I'll also be looking into publishing as a Kindle e-Book, or failing all else, just posting the whole damn thing online for free for anyone who wants to read it :)

One way or another, this story is going to be told!
Posted by Kris Holt at 14:28 No comments: Links to this post