From blossom to balloons in the space of a week... 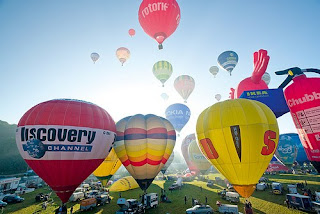 Hurrah for bank holidays. Whenever would I get my chores done if not on these spare Mondays? Of course, it's not a chore to update my blog, but then I've mostly been concentrating on R & R for the last few days and I'm off to London shortly...maybe I'll write a piece on Kew Gardens or sushi when I return.

I have been poring over the news and noted balloons featuring in three pieces on the BBC, so I thought I'd write a short piece about balloons. I've always wanted to take a hot air balloon ride, they seem such a simple, quiet alternative to modern aircraft, as though they were somehow an idea dreamt up from a children's book. Bristol and Thailand have both held balloon festivals recently, there are some wonderful pictures on the web and I encourage you to have a look if you get a spare minute. The Bristol fiesta is held annually, and will definitely be going in my diary for a time when I have some spare cash to enjoy.

Of course, balloons are about more than frivolous colours and soundless summer days in the sky. This week in South Korea, another country I would love to visit, a number of defectors from the North have been sending currency, external media and messages of hope over the border to their countrymen in the North. The giant balloons are rigged with timers so that they will burst at different times, meaning that the cargo will hopefully be distributed across the stricken country.

News that Chairman Kim Jong-il is rumoured to be in China seeking a financial package that will stabilise his country in the wake of last year's unsuccessful currency revaluation will lead some to hope that the isolationist nation can be brought back to the table for talks on nuclear disarmament. However, the unexplained sinking of a South Koran naval vessel earlier this year has led to high tension in the region while investigators continue to seek a cause.
Posted by Kris Holt at 15:38