Death - The High Cost of Living 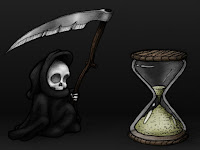 Bloody Egypt. I'm supposed to be on holiday there in a few weeks and after thirty years of meek subservience in the face of oppression, the minute that I click the 'Book Now' button they decide to kick off and overthrow the government, simultaneously sending a message of hope and freedom that will spread fear in the hearts of despotic administrations throughout the world. Now, it may just be coincidence, but I'm a little afraid to do my shopping online in case I cause a general strike that brings down an industry.

Of course, this story is the very definition of history in the making, and as an international officer I'm ideally placed to critique the possible consequences of the uprising. Members of the Muslim Brotherhood will be working behind the scenes to try and promote an Islamic government. The army, currently in control, have released a statement saying that they will listen to the wishes of the people but will they really be pro-democracy when they can install one of their own? What influence will powerful foreign interests in the US, Israel and the Arab world bring to bear?

As I said, I'd be ideally placed to do just that. But it's Friday night and frankly, I'm off the clock now so instead, I'm going to talk about something frivolous that came out of a discussion at work earlier this week.

A few people had read my last entry and said that they weren't really too sure about the optimistic direction that I was taking. It was widely agreed that I was deviating unnecessarily from a tried-and-tested model of politically-motivated doom-mongering, and all agreed that the change of tone didn't really fit with the current climate. Suitably chastened, I have returned to form with a topic that eventually comes to matter to us all: Death.

Death is an occupational hazard for me. I work with the elderly, my friends are fatally inattentive and my extended family are numerous and sickly. Of course, that doesn't even begin to account for the many fish-related incidents I have had to deal with since I bought my fishtanks. If guppies go to heaven, I may well opt for hell if there's a choice. Otherwise I'll have a lot of explaining to do to those little guys.

But I digress. A co-worker was explaining earlier this week about her phobia of being interred whilst still alive. I was happy to help her face her fear by sharing tales from centuries past about bodies being buried with a string tied to a toe and the other end attached to a bell to alert passers-by that they were still alive, or of bodies being exhumed only for horrified gravediggers to find that the undersides of the coffin lids were scratched by the nails of those who were not as dead as they appeared at the time that they were buried.

Happily, such occurrences in modern life are ruled out by the wonders of technology, and now it's possible for your final resting place to be swathed in comfy linen, heated to your personal tastes and even fitted with digital music players and TVs. Frankly, we're not taking chances on an arbitrary afterlife when we're comparitively wealthy in this one. Karma may as well be blowed if you can't take it with you.

Michael Jackson was buried in a solid bronze casket lined with blue velvet with a hand-polished 14-carat gold plate finish. The coffin was worth over $25000. Even so, it pales in comparison to the beauty in this picture. Well, that's me sorted. Now the only question is, can you get free broadband in the afterlife? 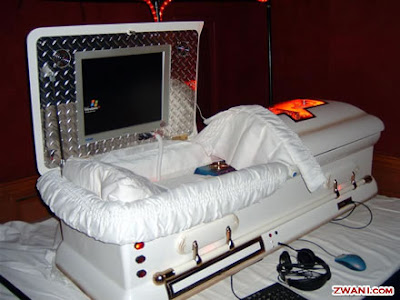