And the World Turns

Three weeks away from my blog, a mostly forced hiatus due to moving house, and the world has become a very different place now to the one I was looking at when I last posted.

Of course, that last post was about the French presidential election and those of us that follow the news will know that socialist Francois Hollande was elected by what Alex Ferguson might call 'a squeaky-bum margin'. Of course, that means that despite the left-wing victory, France remains a deeply-divided country, and the sheer weight of debt across Europe means that no leader will be able to instantly approve large swathes of public sector spending. However, it was cheering that since the majority approval of Hollande's plan for growth on the night of his victory in Tulle, David Cameron has started slipping the 'g' word into his speeches. Of course, there is a big difference between words and deeds, but who knows, maybe the notion that you need growth to boost tax revenues is finally getting through to our leader. Meanwhile, for Hollande, there will be no time to settle into his new role. His first job will be finding an economic plan that mollifies the puffy German premier, Andrea Merkel. 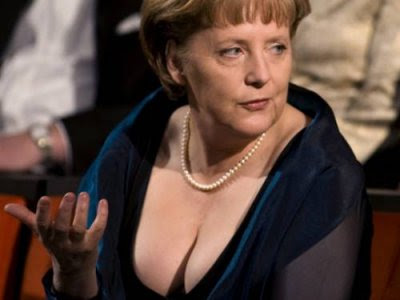 And frankly, who would be poor Andrea at the moment? It's not enough that Great Britain continue to cock a snook at Europe and that she has now lost her closest ally in trying to preserve the fragile finances of the Eurozone (and I think we can agree that 'Merllande' just doesn't sound as sexy as 'Merzoky'.) She now has to contend with Greece's fractured election process, which sees the vote spreadeagled over a variety of left and right wing parties, some pro-Europe and pro-austerity, and others against. With the chance of a coalition being formed that can take the country forward virtually non-existent, there will most likely be further elections in a few weeks time, and a further period of political instability and economic stagnation.

Across the pond, American president Barack Obama has come out in favour of gay marriage, a view apparently shared by our own David Cameron but one which he is afraid to run past his own rumbling backbenchers. Nick Clegg has sold yet another portion of his party's soul for a vague suggestion that there might be a chance to reform the House of Lords, but I hope he's not holding his breath waiting for the discussions to begin.

Finally, I would like to offer my solidarity to the 400,000 public sector workers from PCS and Unite who have gone on strike today in the UK protesting at the proposed changes to their pension schemes. When will our government learn? They cannot continue to pay bankers fat bonuses while in the same breath claiming that the pensions of low-paid workers are unaffordable. It is a stance that lacks credibility and hopelessly undermines their 'All in this together' tagline. And while our own health workers are out on strike protecting their agreed terms and conditions, worldwide that trend is echoed. The foreign office notes that multiple social conflicts are ongoing in socialist Bolivia, where public transport strikes and ongoing health worker strikes have paralysed the capital city, La Paz, and other urban areas across the country.