I am Simon Kerrigan

There can be few arenas more intimidating for a young cricketer to start their international career than the Oval in Kennington. The ground has been home to generations of Surrey cricketers since the early years of Queen Victoria's reign. In that time, it has been host to the first international cricket match in England, the first ever FA Cup Final, and a battery of anti-aircraft guns during World War II. The giant four-tiered pavilion looms over the strip and will be chock-full for every moment of the final Ashes test of the summer. 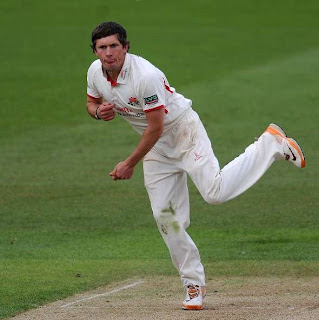 The huge crowds seen this summer are a far cry from the patchy attendances that mark the midweek games in Division 2 of the County Championship. It's in those low-impact surroundings that Simon Kerrigan has built a reputation for taking wickets under the radar.

In his breakthrough season, Kerrigan came from nowhere to take 5 for 7 on a disintegrating surface in the Midlands, and then topped it with a match-winning 9 for 51 against Hampshire at the end of 2011. However, as Kerrigan learned so cruelly this week, it's one thing to face down county players on helpful surfaces, and another entirely to step into an Ashes series that has seen more tension off the pitch than on it.

Kerrigan was presented with his first test cap by English cricket's most successful test bowler, Ian Botham, and waited patiently for his chance. Finally, Cook tossed him a buffed cherry and the torture began.

A succession of floating invitations were cruelly dispatched by Australia's Shane Watson, a man who is himself seen as something of an underachiever at the crease. However, in this match, he was finding the middle of the blade with everything. Kerrigan tried to vary his delivery, but Watson read him at every turn and creamed him repeatedly to the boundery rope. The nadir of a torrid day for the young left-armer came when he was no-balled for a neck-high full toss at eventual centurion Steve Smith. Predictably, that ball too ended up being smashed away for four. 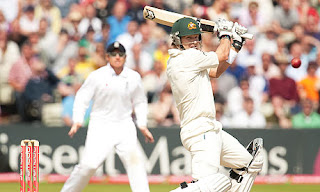 Kerrigan's figures (8-0-53-0) might have been more reminiscent of Twenty-20 stats than a test debut, but he is known for being a resilient character. He bit back the frustration he must have felt, prowled the boundary rope fruitlessly for the remainder of the day and would have told himself that the next day would be better.

Except it wasn't. While Australia went on to score nearly 500 runs, Kerrigan was overlooked for the skiddy part-time medium pace of batsman Jonathan Trott, who then piled on the agony for the young spinner by taking the wicket that he couldn't. In the commentary after the game, Geoffrey Boycott remarked that if he'd got out to Kerrigan, he would have set himself up a noose in the dressing room.

If there is something positive for the young spinner to take away from this game, it is that you only get one debut, and not all stages will be as prominent as this one. Other illustrious names, such as Shane Warne, took time to bed in at international level before going on to become legends of the game. At just 24 years old, there is plenty of time for Kerrigan to make a name for himself with England.

Most of all, I feel for him today. Which of us hasn't started something new and been embarrassingly poor at it, or proven to be talented at something in low-pressure surroundings only to choke when we are suddenly the centre of attention? I know only too well how awful it feels to fail to deliver under pressure. It takes strength of character to bounce back and prove your doubters wrong; I really hope that Kerrigan will do exactly that.

So I'm looking forward to a moment in the not too distant future when I see a young English spinner uproot the middle stump of a world class batsman. When he does, I'll smile, because I know he's taking that journey for me too.
Posted by Kris Holt at 22:31