Four Thousand Words is delighted to take a break from it's usual defeatist Marxist polemic to advertise a pair of frankly superb musicians from the local area who deserve a wider audience.

The Norwich-based acoustic blues duo Dove and Boweevil are comprised of vocalist Lauren Dove and guitarist Mark 'Boweevil' Howes. They launched their first album, 'Getting Somewhere' at the Norwich Arts Centre last Wednesday and anyone who was fortunate enough to step inside the building during the gig could have been forgiven for thinking they had stepped inside a voodoo palace on the banks of the Swannee. 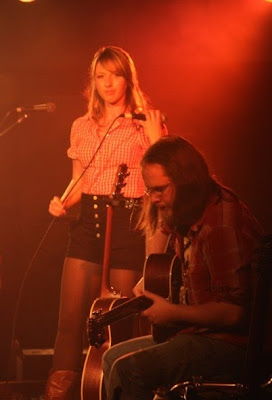 Dove's vocals slip seamlessly between smoky, sensual and surly, and are the perfect complement to Howes' twanging delta guitar. In the first minute of 'Lady Lavoo' you could close your eyes and see the smoke rising over the banks as the steamboats rolled out onto the Mississippi.

The band were initially labelled 'Religious' in error on iTunes but you wonder if there was an element of tongue-in-cheek decision-making on the part of the Apple staff member who classified them.

Watching them play live is an incredibly absorbing experience - Dove seeming to sing every word to you as intimately as if it was intended for you personally, while the Boweevil is seemingly oblivious to the presence of the crowd, a man who would be as happy strumming away to himself under an empty sky.

A Dove and Boweevil concert feels like a shared journey through a raw, untempered sound from the heart of the Deep South to a cultured freedom where the horizon drifts away forever and anything at all is possible.

Videos of two of the songs taken from the album can be found below: 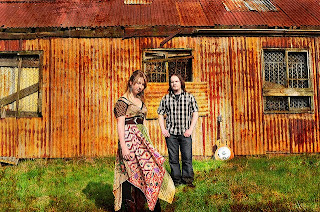 The album 'Getting Somewhere' can be downloaded from their page at CD Baby. I would recommend it particularly to anyone who loves acoustic music, but these guys are friendly, hard-working and highly-talented, and I can honestly say that their album really does have something for everyone.
Posted by Kris Holt at 13:19