I have been waiting a long time to do a piece on the G20 summit protests of 2009 and as the enquiry has opened into the death of newspaper salesman Ian Tomlinson, this seems to me to be the perfect time to raise the profile of the incident and call for everyone to carefully study the circumstances surrounding the case.

On 1 April 2009, Ian Tomlinson had been selling newspapers in London at the time of the G20 summit protests. At approximately 7.15pm, Tomlinson encountered a police line upon trying to take his usual route home and was turned away by officers. Those same officers would later accuse Tomlinson of obstructing the police line, which was the basis for the events that would follow.

As Tomlinson walked away from the police line with his back to officers and his hands in his pockets, PC Simon Harwood first struck the father-of-nine across the left thigh with his extendible baton. Immediately afterwards, the officer then thrust the full weight of his body into Tomlinson's back, throwing him to the floor. 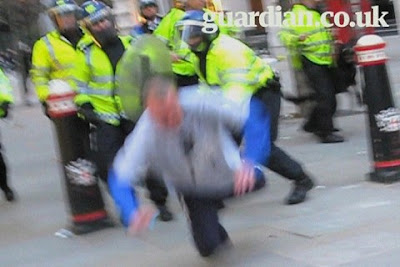 The events were filmed by an American investment fund manager, who passed the footage to the Guardian the next day. He claimed that he had stopped filming immediately after the event because he was scared that the police might react violently to seeing him film. The footage was subsequently placed on YouTube and can be found by clicking here.

Tomlinson received no assistance from police as he lay in the street - those same officers who had been involved in the assault upon him later shamefully claimed that it was protesters who had prevented him from receiving medical assistance. Conflicting reports subsequently suggested and then denied a head injury that he suffered upon hitting the floor and how dazed he seemed as he walked away.

When footage of the incident appeared in the press, The Independent Police Complaints Commission (IPCC) opened a criminal inquiry. Subsequent inconsistencies in post-mortem reports meant that a cause of death could not be agreed on. Tomlinson was known to be a heavy drinker and cirrhosis of the liver was cited as a potential cause, along with the possibility of a heart attack or internal bleeding following the impact when he was thrown to the floor.

PC Harwood came to court earlier this month with a promise that he would not face criminal proceedings as a result of any evidence that he gave at the enquiry. He responded by saying that he wished to do all that he could to try to help. It is small wonder that members of Tomlinson's family left the courtroom as Harwood admitted that Tomlinson was not a threat, and that he struck him for the 'almost defiant' nature of his stance. In complete contrast to the evidence that can be clearly viewed by anyone who watches the video, Harwood then scandalously claimed that Tomlinson 'invited confrontation'. 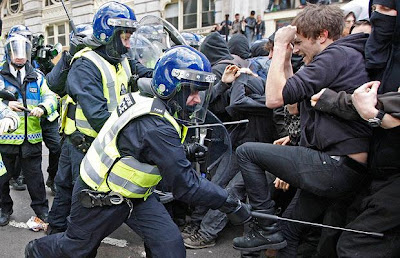 While the emotive language of death and murder is thrown around with abandon in the media, it cannot be said that Harwood was directly responsible for Tomlinson's death. However, the evidence clearly raises massive concerns about the role of officers in the incident and highlights Harwood's reckless aggression in dealing with Tomlinson. The forthcoming misconduct hearing with the Metropolitan Police may well see the end of Harwood's career, but delays on the part of the Crown Prosecution Service have prevented him from being charged with actual bodily harm in the manner that he so clearly deserves.

The inquiry will reopen debate about the traditional model of policing by consent in the UK, highlighting as it does the continued breakdown of relations between the public and the police forces, particularly when policing large-scale protests within London. If it wishes to regain public confidence, the Metropolitan Police should begin by throwing the book at PC Harwood for the cowardly thuggishness that he showed towards Ian Tomlinson on 1 April 2009.
Posted by Kris Holt at 19:02