So I have a confession to make. The novel stalled fairly early on in the project, and never made it past the 10,000 word milestone. This disappoints me, but if you care at all I hope you'll forgive me in the context of the month I've had. I've been to a wonderful wedding on the Thames, a great birthday night out in Windsor and I have a beautiful new lady in my life, not to mention some other exciting news still to come - but that can wait for another day.

The whirlwind nature of the last few weeks really has left me a little adrift so you'll have to forgive me for not posting in the last couple of weeks, but there has been something that has caught my eye recently and is well worth a mention. 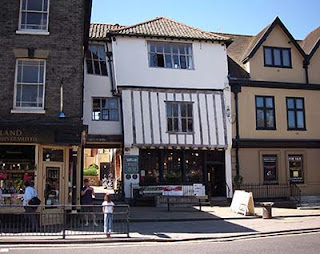 I live in the city of Norwich (official tag line - "A Fine City", my suggested alternative - "Rhymes with Porridge") and one of my favourite parts is the area known as Tombland. Despite rumours to the contrary, in this context, 'tomb' does not refer to ancient graves but is derived from a Scandinavian word for an open space, and thousands of years ago, the area was once a market square.

Just to the left of the picture above is a second-hand bookshop and I walk past it twice every day on my way to and from work. There are always a number of interesting books in the window, and roughly each week the stock seems to be switched around (or possibly purchased?) so there's something new to see. I am always keen to see what the window has in store. 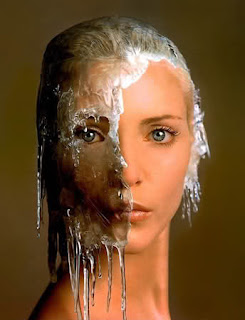 The first cover that caught my eye was this one for a Pirelli Calendar book from years ago. The subject is German fashion model Nadja Auermann and this photograph attempts to capture her 'ice maiden' image.

I would love to say that it was frosty outside and the ice in this photograph juxtaposed neatly with the frosty city air and pearled dew on the leaves, but it would be a lie. Nonetheless, it's an incredibly memorable image.

Shortly after Nadja disappeared from her regular appearances on my morning walk, I was greeted instead with the gem below. 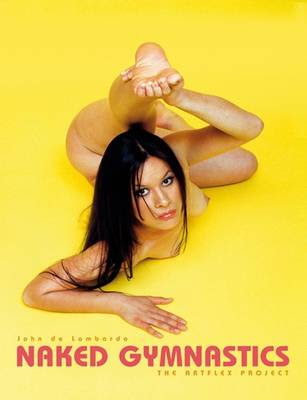 Bless John de Lombardo. Another image with German origins, this effort achieved the not-inconsiderable task of making me look forward to getting up and leaving the house early in the mornings.

Every day I wondered about this book. Should I buy it? I took advice on the subject from Facebook and Twitter. It would certainly make an interesting conversation piece on my non-existent coffee table. But would inquiring about the price just make me look like a cheap pervert? Suddenly I was twelve years old again and sneaking rudimentary glances at the Page 3 models in the Sun (though even then, I knew enough about the quality of the content to know that it wasn't worth paying 20p for.)

Sadly, before I could make a decision either way, Naked Gymnastics was swept away and replaced with one called:

Paleopathology of Danish skeletons - a comparative study of demography, disease and injury.

It's a far cry from the books that had been there before, but no less worthy of its place in the window. Since I first saw the title, I'm interested in knowing exactly how Danish people have died through the ages.


It's become another entry on the list of things that I will think about before I get to sleep tonight, and when I walk past tomorrow, I will wonder again about the specifics of Scandinavian diseases and how they could possibly be of interest to anyone else in Norwich.

I'll also keep an eye out for the next thing that appears in that window. If it's half as interesting as the past ones I've seen, it might even get a future entry all of its own.
Posted by Kris Holt at 23:10