Nanowrimo, and a General Update

I'd just like to begin this post by apologising, as it's been a couple of weeks since I last did an update.  There's not really too much of an excuse, seeing as I've been doing a lot of reading and a lot of writing.  Of course, there's been Nanowrimo, but some of my compatriots are not only successfully heading for 50,000 words, but they're managing to blog every day about their experiences.

In terms of writing, I've managed to meet my pre-Nano target of 25,000 words, and I'm confident that if I'd been able to stay with the project, I would have finished comfortably with days to spare.  Plus, it's been really nice to work on something other than my novel, and feel the excitement of a new project taking shape.  Before November, I'd been reading Bernard Cornwell's Saxon Stories and watching 'Vikings' on The History Channel, so I was really in historical fiction mode.  You might have read my own three-part starter from my own work, starting here.

While we're on the subject of historical fiction, why not check out the awesome theme music from the show?

While details about the first Viking Age are sufficiently rich and vague enough to throw up ideas for any interested writer, one thing that struck me is how the stories are very focused on male heroes and villains, and for that reason, I was keen to mix it up a bit.  Hence, my Nano project focuses on Runnmidr Sigurdsdohtor, a shieldmaiden from the eighth century.  She is the first daughter of a Jarl (the closest Viking equivalent to an aristocracy) and a tough, flighty teenage girl.

Married off at sixteen to the son of a nobleman from Norway whose father wants him sent far away from war, she is left at home when the rest of her tribe heads south to honour the obligations of their allegiance.  Her new husband, who is no older than her, is similarly frustrated by having been sent away.  He encourages the headstrong Runnmidr to steal one of her father's spare ships by exploiting her relationship with her oldest friend, who is apprenticed to the Jarl's shipwright.  Runnmidr and her husband ride with his retinue to England, determined to be raiders and bring home treasure from Christian lands.

Their initial sorties are successful, but a lack of judgement on Runnmidr's part sees her marching against a mercenary band with more resources than at first there seems.  She is captured, and despite several attempts to escape, is dragged into the life of the mercenary band.  She also meets their leader, Oswine of Rocdaele, and he gives her instruction in fighting skirmish battles rather than the regimented battles she was taught to expect as part of the shield wall. 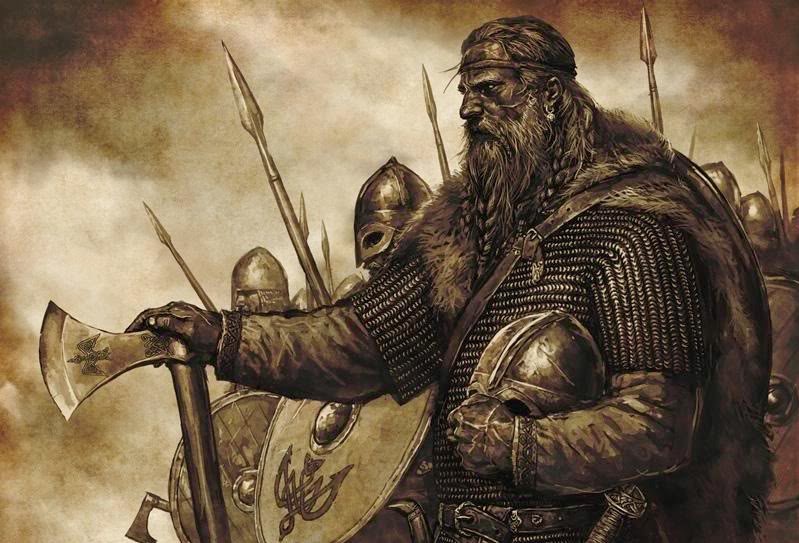 As the pair learn more about one another, she realises that she has more in common with Oswine than she ever had with her husband, despite the fact that he is twice her age and more.  She admires his quick tactical brain and gregarious ways, while he is an admirer of her strength and determination, and is keen to persuade her to fight alongside him as he attempts to gain control of his family's former lands on the isle to the west.  However, when she receives word from a countryman that her brother has been killed and the Jotun father she loves so much has been sorely wounded, will she seek to return home to protect her family's legacy?

Hopefully that whets your appetite a bit - it was certainly fun and pretty easy to write, even if it does tend towards YA a bit much for my liking (note to self: add more pillaging.)  I'll update you once I've had a chance to review it, and maybe post an edited section here once I've organised my work under headings.

In terms of my reading, as well as having been through Bernard Cornwell, I had a chance to revisit George RR Martin's second 'Song of Ice and Fire' novel with my reading group, and I also finished Emmi Itäranta's 'Memory of Water'.  I'll publish a full review of that one soon, but it was a novel that bucked the trend for me.  I'm used to reading books that tail off as the author gets close to the finish and clearly tires of their subject matter, but everything good in that novel is composed into a powerful third act that subsumes the first two like no other book I've read since '1984'.  For the record, that's high praise indeed.

Finally, I've decided to spend some time concentrating on other authors I know based in Norwich who have been busy publishing their novels while I talk about mine in vague distant terms.  I have recently bought myself a Kindle and added Lucian Poll's tale of bloodsoaked horror, 'The Floors' to my collection.  I also have high hopes for Simon Poore's 'An End of Poppies' and 'The Last Englishman and the Bubble', which interests me for no lesser reason than that the main character bears my name.  Hey, there's a good marketing strategy - name your characters after people with giant egos, and let them do all the advertising for you!
Posted by Kris Holt at 14:51