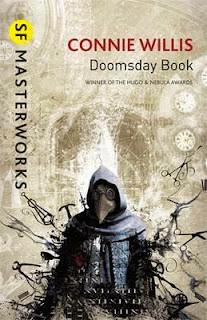 Winner of the Hugo and Nebula awards following release in 1992, the story of 'Doomsday Book' is set between a future Oxford some fifty or so years hence, and the same location some seven hundred years previously.

Historian Kivrin Engle utilises time travel to explore and research Oxford seven centuries ago, but unwittingly suffers a fever and is taken in by a local noble family. As a consequence of her illness, she cannot fully recall the place where she is due to find the gateway back to her own time. To make matters worse, the same illness ravages the university that is supporting her study and Kivrin is cut off, effectively stranding her in the past.  It then becomes apparent to her that she has not arrived in the past at the expected time, but has in fact arrived in Oxford at the same time as the Black Death.

With the two diseases rampaging through the respective populations, Kivrin is forced to watch her adoptive family and friends die horribly, one-by-one, without knowing if there is anything she can do. At the same time, her instructor, James Dunworthy, must breach all protocols, risk exposure to the deadly virus and still do whatever it takes to find a way to bring Kivrin back home.

With the narrative split between Kivrin and Dunworthy, Doomsday Book is a slow-burning example of technical mastery that ultimately takes the breath away. It is heartbreaking for me, as a fan of such an immense novel, to read it described on other blogs and on Goodreads as boring; in fact, the tension rises by degree with each twist and fresh disaster to the point where it is practically unbearable. Despite being nearly 600 pages long, I finished the book in only a couple of days and was left physically drained by the effort. You can feel Kivrin's despair at her utter helplessness as each of her new companions slowly succumbs to the plague. It is not a happy story, make no mistake, but it is stunningly observed. Hopes are raised and then brutally cut down; each new victim feels like a wound inflicted upon the reader.

Building tension to a sufficient climax takes time, and you can feel the frustration oozing from Dunworthy as he has to deal with the repetitive minutiae of his job while his protege is subject to any number of imagined horrors. Doomsday Book is a study in plot development for new authors, with each new event building crisis-upon-crisis. As a further example of Willis' brilliance as a storyteller, nothing at all from the buildup is wasted - Dunworthy's student with Lothario tendencies distracts the nurse, allowing him to flee the infirmary, and as he finally completes the tasks he needs to mount a long-overdue rescue mission, the choir who have distracted him throughout the book with their constant trivial demands are singing, 'Now At Last Our Savior Cometh'.

There is little more to say than this - if you are a fan of science fiction, or of carefully constructed fiction of any genre, you should read Doomsday Book. Much like Marmite, it splits readers down the middle, with most people either loving or hating it. Be willing to stick with it for the duration, rather than giving up early as so many seem to do, and I promise that you'll be rewarded.  This is a colossus of a novel, and one that deservedly bestrides the genre.
Posted by Kris Holt at 20:24