It was early on a Tuesday - half past eight, to be exact - when Laura met the fairy.  She was was on her way to school when she saw him, hiding behind a road sign.  The fairy was a small fellow, no more than a few inches tall.  He didn't look like the kind of fairy you see on TV or in other stories.  Rather than a wand or wings, he had tanned skin, long hair and a small pointed hat.

The fairy said.  'Are you sure you're not scary?'

Laura knelt down next to him.  'Quite sure.  Are you okay?'

Laura wasn't sure how to answer that question, but she did the best she could.  'My name's Laura and I'm a human being.'

The fairy rubbed his chin and said, 'I've heard of human beings, but I've never met one before.'

'That's strange.  Human beings are everywhere.'  Laura looked around for other people, but it was a quiet morning in her small village and just now, no-one else was around.  'Well, most of the time they are.'

The fairy nodded.  'Well, that's nice for you.  It's good to have lots of friends!'

'I should probably be going,' the fairy said, picking up his hat.  'I have to get home.  It's already morning and I'm very late.'

'Oh.  I'm sorry for keeping you,' Laura said.  But she was too curious not to ask one more question.  'Before you go, can you tell me where fairies come from, please?'

'Fairies come from Turkey.  Everyone knows that.'

'Really?'  Laura had never been to Turkey but she knew it was another country far away, across the sea.

'Yes.  We all live in houses underground.  Our fairy chimneys poke through the surface.  I'm told that human beings come to Turkey to see them.'

'You should,' the fairy said.  'And now I have to go.  Bye!'  Laura watched him run over to the verge and begin to dig quickly with his hands.  In no time at all, he had disappeared beneath the earth and only a small mound of soil was left to show he had ever been there at all.

Laura was about to finish her journey to school when she looked at the mound of soil and saw a small gem on top of it.  It was a sapphire, as blue as the sky.  It sparkled in the light like a star.  Laura realised that the fairy must have dropped it when he was leaving.

Quickly, Laura bent down to pick up the sapphire and put it safely in her pocket.  She had to go to school now, but when she got home later, she spoke to her mum, who agreed they had to visit the fairy chimneys straightaway and return the gem to its rightful owner.

Fortunately, the next day was Saturday and Laura didn't have to go to school.  Her mum had already been online to book flights, so they were able to leave straightaway.  It was a very exciting day for Laura.  First, they got a train to the airport, and when they got there, Laura had fun exploring all the different shops.  Then they caught a plane to Turkey.

It was very hot and sunny when they landed.  Laura's mum made sure she had a hat to wear so that she didn't get too hot, and then bought them both sweets as a treat.

Laura slept through the last part of the journey, which was a taxi ride to the chimneys.  When they arrived, the sun was going down and Laura knew that she had to find the fairy and return his gem before it got dark. 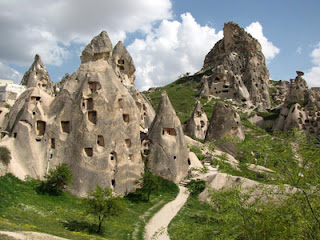 She saw a guide standing near one of the chimneys and asked him, 'Where are the fairies?'

The guide looked around but couldn't see any movement.  'They're a little bit nervous of humans.  I think they must all be hiding from us underground.'

Laura was disappointed that she couldn't see her new friend, but she knew what she had to do.  She went to the nearest chimney and placed the sapphire on the ground there.


'Hello,' she called out, feeling a little nervous herself.  'I met one of you yesterday, and he left this behind by accident as he was leaving.  Perhaps someone could return it to him, if that's okay.'

As Laura watched, the ground opened up underneath the gem and it vanished beneath the surface.  She couldn't see him, but she got the new feeling that her new fairy friend was grateful.  She held her mum's hand, waved at the chimney and got back in the car to leave.  As they were driving away, she watched until all of the chimneys had disappeared into the distance.

When all was silent and it was dark outside, the fairy popped his head up from a hole, holding his sapphire carefully so he didn't lose it again.

'Thank you Laura, that was really kind,' he said, and even though she couldn't see him, he knew she would know that he was waving back at her.