My Travels Through Imaginary Lands, Pt 2.

Two days later, I stepped off the ferry in Hamrh, second city of Rhigo and mainland Nebra's most eastern port.  Ports all over the world are no different from one another; fractious, busy places, and Hamrh was busier than most.  The dock area was split in two, with the southern half reserved for passengers and the northern half dedicated to countless small fishing boats that bobbed easily on the silver waves.  The fishermen themselves were grouped together, blowing on their hands and laughing readily in the early morning chill.  Their work for the day was already done - tables of wriggling daggerfish were laid out on the quay, and the puffball-sized waterskaters that the locals called 'zur' were being carved up by expert hands and salted for transport inland. 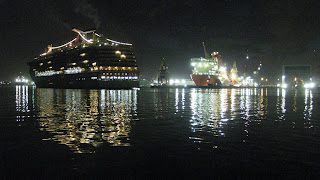 Above them, tethered to stone posts on the dock with ropes thicker than an arm, the waveballoons swept from side to side with the whims of the breeze.  Earlier, they would have been shining their spotlights onto the inky sea, searching for the schools of fish and elusive zur that made the port such a hub of enterprise.

It was, in short, a scene of some incredible industry, and the workers added to the scene themselves.  Those fishermen I have already mentioned wore tough woollen cloaks over their broad shoulders, loose shirts and undershirts in layers, and heavy leather trousers tucked into their boots.  The dockworkers, almost exclusively women, tied their long hair back with dark scarves and wore shawls over dresses and trousers.  The swiftness and exactitude of their movements as they sliced, gutted and prepared is surely unmatched anywhere else in the continent.

The scene was afforded an ethereal air by the billowing banks of mist that floated off the water, obscuring and then suddenly revealing row after row of pinched white faces, all focused intently on the job at hand.  The sea mist became no less sinister for knowing that somewhere out beyond it, pods of Ondian gunships lay in wait for any force that would attempt to cross with invasion in mind.

Any man awake at the crack of dawn with a long walk before him will have just one thing on his mind - breakfast.  Ducking the crowds and heading into the streets, it wasn't long before my nose guided me down sandstone steps to a canteen where the narrow yellow doors had just opened.

A blubbery, shirtless man seemingly with no body hair whatsoever waddled through before me, easing a stew pot that really should have needed two men to carry.  When he saw me standing there, he greeted me with a nod of his head.

Having manouevred the pot into an empty corner, he turned to me and mimed pulling at a non-existent beard.  'Ondian?'

I smiled.  It was the same everywhere.  Ondian beards, oiled, plaited, braided, often worn down as far as the wearer's knees, were a telltale sign of one's origin.  Here, I was a single Ondian face among many, and though there were fairer options for tourism further up the coast, Hamrh offered the most convenient gateway to those looking to head west.

The blubbery man was evidently the owner of the establishment and he pointed to two tall chairs at the bar.  I took the nearest and sat my small canvas bag beneath me, leaving the one next to me as an option for others who might wish to sit at the bar.  Before me, rough wooden shelves laden with bottles bedecked the crumbling brick facade.  Beneath them, two stew pots that made their cousin from earlier seem small bubbled and frothed with volcanic intensity.

I was offered a choice.  'Which you want?'

My poor overworked nose failed me in a most uncharacteristic manner.

'Whichever doesn't have fish in it,' I replied.  'I can't stomach them so early in the day.'

The blubbery man grinned and ladled out a bowl from the rightmost of the two pots.  True to my request, the fatty red contents had some form of meat, a starchy root to give it body and strawcumbers, cut into rough slices.  It was delicious, and breathing in the steam did wonders for my constitution.

Other customers had filed in behind me while I was eating, but no-one took the seat next to me.  Rhigans regarded Ondians as being rather officious, unwelcoming types, a throwback to several hundred years in the past when much of eastern Nebra had been subject to Ondian rule.  The capital of the empire in those days, Esteryn, was now just ruins.  Modern Ondians held little affection for it, given that it had been closer to Camir than the peninsula we now called home, but for those with little historical knowledge, there was still a faint cultural call, a reminder within the bones that we had once been part of something much greater than ourselves.

The barkeep busied himself wiping glasses with the corner of an apron that was probably dirtier than the glasses.  When he saw me looking at him, he grunted.  'Holiday?'

'I suppose,' I said, tapping the spoon thoughtfully on the edge of the bowl.  'Visiting a friend, really.  But taking a long route.  I have lots of time.'

I could tell he thought I was mad.  Still, the Y-trains moved no faster than walking, and I wasn't about to fight someone for the chance to hang off the side and take the weight off my feet.

I finished the bowl with relish, and left a sizable tip.  The barkeep's eyes rested just a little too long on the coins as they jingled onto the bar.  I scooped up my bag and was already halfway out of the door when he called me.

I turned around and he motioned above my head to a sign in Rhigan on the lintel.  'Before you go, touch it.  Is lucky.'

I could speak Rhigan fluently.  The sign read, 'Our true friends never really leave us.'

'True, that,' I said, tapping it with my fingertips and waving before closing the door.