Anyone want to watch the Footy?

Anyone who says there are no easy international football games clearly hasn't played Honduras lately.

Yes, I think it's time for a World Cup post. I've resisted the urge, watched enough stale football matches in the last couple of weeks to make even the most ardent fan gag on his vuvuzela and I'd really like to write about tomorrow's budget...but let's face it, financial reports are only really going to make England's climate seem cheery in comparison.

So then, time to move from fiscal self-destruction to football self-destruction...and Fabio had better find a big selection to back up his big words against Slovenia on Wednesday. He rightly tore into John Terry for his disgraceful press-conference earlier this week, describing his decision to do so as a 'big mistake'. Terry should remember that while he might still think of himself as the captain, that distinction was removed a few months ago when he proved himself unable to demonstrate behaviour in his personal life appropriate to his professional position.

That said, it is surely time to sit down with senior players and get their opinions on a starting formation for the Slovenia game. Terry should not be demanding the inclusion of his former team-mate Cole - it is certainly not his place to do so - but it cannot be denied that Cole would add some much-needed width against a Slovenia side who will have watched the Algeria game and will surely come prepared to park the bus against England.

Fortunately, when we need someone to take the media spotlight off our beleaguered national team, there are many other sides and individuals vying to do just that. While world champions Italy were only able to scrape a narrow draw against minnows New Zealand and European champions Spain decided that they really didn't fancy it much against a spirited Swiss side, France have apparently decided that the 'hand-grenade' approach to teambuilding is the way to ensure success.

Chelsea striker Nicolas Anelka has been sent home amid allegations that he told manager, Raymond Domenech, 'Go screw yourself, you son of a whore', while Fabrice Evra was pictured scuffling with the fitness coach during training. In true French style, the squad is now boycotting training in protest against Anelka's explusion and may even do the same for tomorrow's match against South Africa, conveniently avoiding the chance of suffering yet another defeat. The French Football Association could have saved the cost of Le Sulk's ticket, given that the rest of the squad will be joining him on the flight home by the end of the week.

North Korea were found wanting against Portugal and cannot now hope to qualify for the knockout stage. The same is true of Cameroon, who threw away a comfortable lead against Denmark over the weekend. In fact, all of the African nations have been mediocre at best, with the much-hyped Ivory Coast set to be eliminated from the Group of Death and South Africa odds-on to become the first host nation to fail to get beyond the group stage of their own tournament. At least in Siphiwe Tshabalala's strike against Mexico, they have given us one of the moments of the tournament so far.

Germany may have lost to Serbia but have looked dangerous in front of goal, while Holland have been quietly effective and Argentina devastating, Lionel Messi's trickery laying on a hat-trick for Real Madrid's Gonzalo Higuain. Question marks remain over their ability to defend against better sides, but I am hedging my bets and saying that with the excellent performances seen from Mexico and Uruguay in addition to the usual suspects, it will be a South American hand that raises the winner's trophy at Soccer City, Johannesburg on July 11.

I found the little gem below doing the rounds on the internet. I don't know if it's a genuine picture, but if it is, it's true genius. England for 2018! 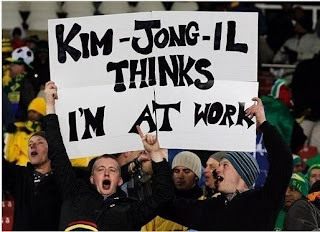