So I've been away from work for a few days, preparing for my final AAT exams, which (thank Christ) will be finished this time next week. I'm preparing myself for a massive sense of anti-climax (which won't be difficult for me to deal with, given the life I've had) but it will be nice to get them out of the way, as I've been feeling a dose of pre-exam adrenaline for days now, and if it goes on for much longer I fear I may just have an aneurysm.

A shout to Kev and Corinne, who came over earlier this evening and entertained me massively by bickering over which of them was the greatest attention seeker and then proceeded to prove the point by taking lots of pictures of themselves eating scotch eggs and so on. Thank you both, and there, I've blogged about you now. I hope you're happy :)

I bought a fish tank! I've wanted to own one for as long as I can remember. My parents owned one when I was very little, and I would come downstairs at night and press my nose against the glass as tiny neon tetras zipped around the plants inside the tank. Furthermore, to my eternal pride, I have paid for the tank, the stand and most of the peripherals entirely with my poker winnings. It'll leave a big hole in the account where several hundred dollars used to be, but if I really am a good player I should be able to put it back there in time. Plus I won't be playing any poker in the near future, what with revision time and work commitments.

I have a very thorough book on how to prepare a working fish tank, and there is more science to it than first it seems. You cannot just add water and fish, because the water needs to be dechlorinated first to make it safe for the fish. Then you have to get the water temperature and pH balance right for the species that you want, add substrate and plants to create the right aesthetic conditions, and run a filter through a cycle of bacteria that convert ammonia to nitrite to nitrate. And this is all before you even begin!

It's silly but it's exciting. The tank looks great, though I'm having some issues with plants dying due to the lack of light in certain areas of the tank. I'm certain I can remedy that. I also have a regular chemistry set of water testing tools that show the filter process is underway, though it's still too early yet for fish to survive. I'll keep you posted on how it goes. 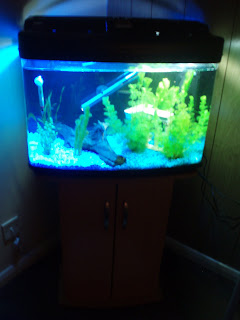 My best friend Erin is very excited about Wimbledon because she loves Rafael Nadal. I hope he wins, because it will make her happy.

At least Emile Heskey played well. Perhaps it's something in the water.
Posted by Kris Holt at 00:27