I have a confession to make - despite my unerring belief in the cause promoted by yesterday's March for the Alternative in London, I didn't attend the event myself. Today, as I watch coverage of the event on the news and read the stories of those that marched, I realise that I have missed out on something very special and something that I had a great responsibility to be a part of. 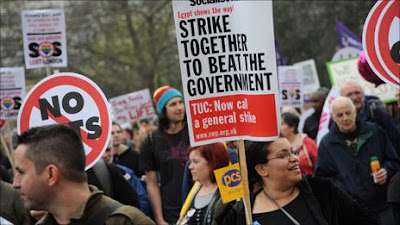 As I know I have a few overseas readers, I realise that I may need to explain a little about yesterday's event. Put simply, the coalition government in Britain is utilising a number of questionable fiscal justifications to privatise institutions that are central to Britain's culture and living standards, such as the National Health Service. Rather than examine in detail the root causes of our financial crisis, they have sought to address the deficit issue at a breakneck speed, despite evidence suggesting that this is not the best way to support the fragile economic recovery. Using the deficit as an excuse, they have introduced policies that benefit the largest companies in Britain while penalising and marginalising the poorest and most vulnerable individuals.

Yesterday, finally, the government's plans were publicly opposed as more than half a million trade unionists, public sector workers, pro-peace groups and concerned individuals marched through the streets of London to a rally in the city's Hyde Park.

As anyone familiar with protests in modern Britain might have predicted, today's headlines are about the minority of violent thugs who descended upon Trafalgar Square well after the march had ended, and those members of protest group UKUncut who took direct action by occupying thirteen shops on Oxford Street that members believe are dodging corporation tax responsibilities. I cannot condone any of those actions and Trades Union Congress have publicly condemned those who have been involved in violent acts following the demonstration. Credit should go to Metropolitan Police Commander Bob Broadhurst, who was quick to state his belief that the destructive minority were not associated with the peaceful marchers who did so much yesterday to promote their genuine cause.

The march must be taken in context. Those on the route covered an entire spectrum of respectable society, including retired care workers, representatives of disability rights groups, middle class parents who purposely took their young children, and students burdened with debt as a result of the regressive policies of consecutive governments. More importantly, it represented the first genuine show of opposition to devastating coalition reforms. For me, it is a tremendous irony that opposition leader Ed Miliband did not make the march alongside the very people he will see as his natural supporters come the next general election. 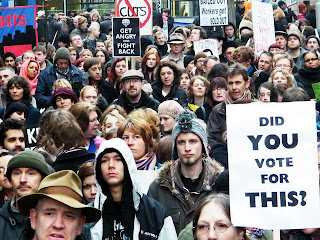 The March for the Alternative was the largest march of its kind since the protest about Blair's war in Iraq. However, it alone will not be enough to derail a government who are gambling massively on economic growth paving the way to a stable future. Margaret Thatcher once famously stated that she was not for turning, and David Cameron will be keen to show that just because he does not have a mandate does not mean that he cannot seize an opportunity when one is presented to him.

It is a fact that strong opposition leads to stronger and more accountable government and this is the first evidence that the labour movement is stirring from its long slumber and preparing to face down the threat to its survival. 26th March 2011 will hopefully be remembered as a watershed for many reasons - it may be a day that prompted government supporters to consider the genuine consequences of their decisions, or a day which began a movement that successfully demonstrated the massively positive role that well-funded public services play in a healthy and vibrant society. Perhaps, most importantly of all, it will be remembered as the day that trade unions in Britain regained their pride.
Posted by Kris Holt at 10:27