It's not the end of the world

In case you were busy and missed it, this weekend was supposed to be the Rapture. At least, that is according to 89 year-old Christian evangelist, Harold Camping. The US-based radio broadcaster used a Bible-based numerology system to start a campaign that quickly spread worldwide, predicting that the beginning of the end would come for non-believers at 6pm Californian time on the 21st May 2011.

Of course, predictions that the world will end are nothing new. Self-appointed soothsayers preached in the marketplaces of the old world. The industrial era gave us images of sandwich boards bearing messages of doom and now, in the post-modern era, we have the internet when we wish to share our apocalyptic predictions with fellow believers. Hollywood too has jumped on the bandwagon, enlisting Jimi Mistry and John Cusack into an implausible blockbuster based on Mayan predictions that left physicists the world over bleary-eyed. 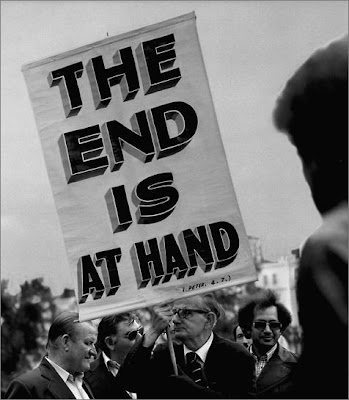 So it seems we all love a good prediction about the end of the world. Believers have an opportunity to strut around and brag about their forthcoming good fortune while the sceptics gather together in large numbers for anti-Rapture parties, risking a truly epic amount of irony should things really go South. Even the supposedly impartial BBC got in on the act, with a tongue-in-cheek headline of 'Rapture: Believers perplexed' in the wholly predictable aftermath.

Now that the headlines are fading into memory, we should remember some of the genuinely sad stories behind the events of this weekend. There are those who have made preparations for the next world and spent a lifetime's worth of savings on advertising the event. It's easy for nay-saying atheists to shake their heads and wonder at the inherent gullibility of man, but while I am not a believer in God myself, I recognise how it would be important for a believer to prostrate themselves fully before the notion of heaven and ultimate resolution. After all, if you can't subscribe unquestioningly to a higher purpose, can you really call yourself a believer at all?

The Washington Post has since reported that suicide prevention hotlines have been set up in case believers fall into depression after the apocalypse failed to happen. College funds have been spent, homes have been sold and yet, life goes on. The bewilderment will pass. Some believers are already claiming the failure of Judgement Day to materialise is a test of faith from God and they have every intention of persevering.

There have been (admittedly contentious) scientific studies that suggest a link between prayer and improved healing times. Whether you subscribe to this theory or not, the subject-expectancy effect suggests that prayer can aid in recovery, not necessarily due to divine influence but due to psychological and physical benefits. It has also been suggested that if a person knows that he or she is being prayed for it can be uplifting and increase morale, thus aiding recovery.

I believe that we live in an increasingly rational world and that humanism is the way forward. There is no harm in preparing your soul for the next world if you feel it is important to do so, but we should recognise that we have a primary overriding responsibility to the people we live alongside in this one. It should be recognised that whatever else religion could be said to be responsible for, it is probably the oldest organised means of providing charity, support and encouragement to those most in need.
Posted by Kris Holt at 21:37