For only the second time since he rose to the leadership of his party, I have found myself admiring Ed Miliband. When he spoke today, he was keen to emphasise the values of the modern Labour party and he even came up with the very quotable, 'When those in power say, "You're going to face five bad years and there is nothing to be done about it," that is a statement of their values and priorities.' There are no surprises about the values and priorities of the coalition government, who are pressing ahead with plans to reform the benefits system, despite widespread condemnation and a wealth of evidence that suggests those in genuine need will suffer tremendous hardship as a result of the changes. 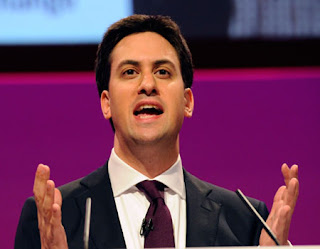 The year ahead will prove to be a defining one for Miliband and for the Labour Party. The last Labour government sold the soul of their party in an attempt to frantically garner floating votes, and polls suggest that despite massive cuts that have savaged entire communities and crippling inflation that will see real incomes stagnate for at least five more years, the Labour Party's support doesn't appear to be growing.

With poll support for the Liberal Democrats having already evaporated, voters are instead looking to fringe parties such as the Greens or UKIP, or even switching to the Conservatives themselves. This phenomenon comes from a shared public perception that the longer austerity goes on, the more necessary it must be in order to tackle the economic crisis. And while cuts may help to balance the books, what will the price be in social upheaval, inequality and shattered lives in the decade to come?

What then, can Miliband do? Gregg McClymont, the shadow pensions minister, has written that the Tories are attempting to tag Labour as the party of 'tax and spend', and that the party will only avoid what he calls 'the Tory trap' by resisting the temptation to appeal to its core supporters in the public services.

I disagree. I am an educated professional, a public sector worker born into a low-income family with naturally socialist leanings. I should be a dyed-in-the-wool Labour voter, but I am not. Modern Labour thinking offers no alternative to the Conservative slash-and-burn policy, and I simply do not agree that cutting public services is an unavoidable necessity to promote an economic recovery.

So to you, Labour Party, I have this to say. I should be your core support. My vote is here, and I want you to claim it. But it would be a fatal assumption for you to assume that you'll get it without radically changing your thinking.

Today, there were signs that that change may be just around the corner. Ed finished his statement by saying that the Labour Party would promote the 'fairer sharing of rewards so that we discourage irresponsibility at the top and the bottom of society.' It is a statement of intent that shows that Ed at least is facing in the right direction.
Posted by Kris Holt at 22:29