N30: Putting the Strikes in Perspective

It's been a good week for the left-wing, and a bad week for Jeremy Clarkson. On Wednesday, two million public sector workers around Great Britain withdrew their labour and took to the streets of the nation to protest against proposed changes to their pension scheme. 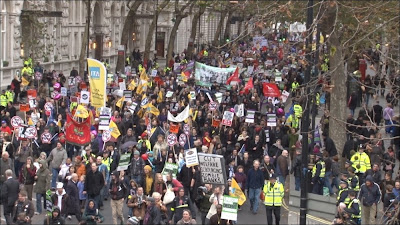 I've been reading an excellent new blog by RepresentingtheMambo that talked about his experiences of attending a strike rally at the NIA.

It seems that the experience of being in opposition is a trying one for the left. Anyone who attended a pensions rally will be familiar with pro-Labour and anti-Conservative rhetoric, but how many trade unionists are really Labour supporters any more? The Labour Party has clearly forgotten about the hand that feeds it in a race to pander to the pampered interests of Middle Britain.

One of my previous posts concerned the ways in which the Labour Party needs to reinvent itself, and in turn how it needs to bring some hope back to the world by resisting the prevailing neoliberal way that is causing so much misery as it now struggles for survival. However, if we really want to start making positive changes to the country, we need to dare to make some really difficult decisions about how to prompt growth, rather than replicating the Tory cuts.

Now, however, is a the time for optimism and not fresh cynicism. For the first time in so long, people are standing up and opposing all of this government's cruel plans. The government may just have underestimated the strength of public support for its own sector. There may yet be scope for an alternative. And whatever the alternative might be, it has to be better than this coalition of continued abject failure.
Posted by Kris Holt at 23:07